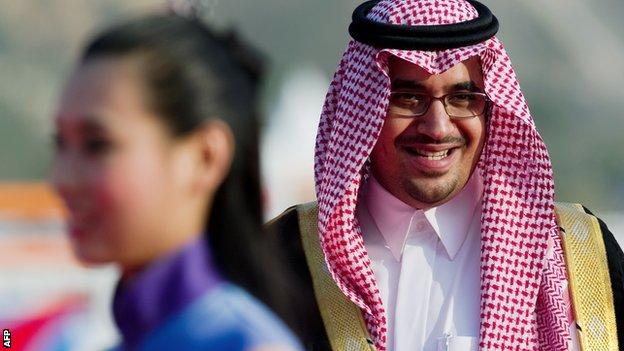 The president of the Saudi Arabia Olympic Committee has ruled out sending women to London 2012, leading to a call for their exclusion from the Games.

Prince Nawaf bin Faisal said his body was "not endorsing any female participation at the moment."

"We would expect the International Olympic Committee to exclude Saudi Arabia," she said.

Women at the Olympics

"Saudi Arabia's current refusal to send sportswomen to the Olympics puts them directly at odds with one of the IOC's fundamental principles as laid out within the Olympic Charter.

"It reads that 'any form of discrimination with regard to a country or a person on grounds of race, religion, politics, sex or otherwise is incompatible with belonging to the Olympic Movement'."

In March, the Saudi Committee released a list of potential candidates for London which contained females, in a move which led to the IOC commenting they were "confident Saudi Arabia is working to include women athletes" for the first time.

Nawaf did not exclude the possibility that Saudi women would be allowed to compete outside of the official delegation.

This arrangement previously saw equestrian competitor Dalma Rushdi Malhas, the only possible female qualifier for London, win a bronze medal in show jumping at the Youth Olympics in 2010.

The IOC said in a statement: "We are still in discussion and working to ensure the participation of Saudi women at the Games in London."