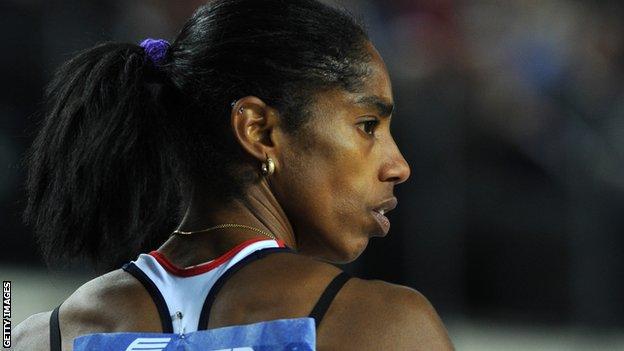 The 39-year-old mother-of-two became the second oldest world champion in history in March this year. Aldama's first global title, at the World Indoor Championships, was all the more inspirational for the hardship she has endured since moving to London more than a decade ago.

Aldama previously won a silver medal outdoors at the 1999 World Championships and topped the world rankings in 2003 after a personal best leap of 15.29m.

Cuba-born Aldama moved to east London in November 2001 after marrying Scotsman Andrew Dodds, who she met in Havana.

Her husband was jailed in 2003 for drug-trafficking offences committed before they met; he served half of his15-year sentence but the couple remain together with their two children.

Aldama became the oldest track and field athlete to make a debut for Great Britain when she competed at last year's World Championships, aged 39. She finished fifth.

Disowned by Cuba after leaving the country, she first sought a British passport in 2002 but when it became clear one would not be granted in time for the 2004 Olympics she instead took up an offer from Sudan. She came fifth in Athens, having come fourth for Cuba in Sydney.

She was finally given a British passport in 2010, having waited to reapply until after her husband's prison release.

It was Aldama's ability at chess that first earned her a place on Cuba's national sports and recreation programme, but her hyperactivity led her to try volleyball, hurdles and high jump before settling with triple jump at the age of 14.