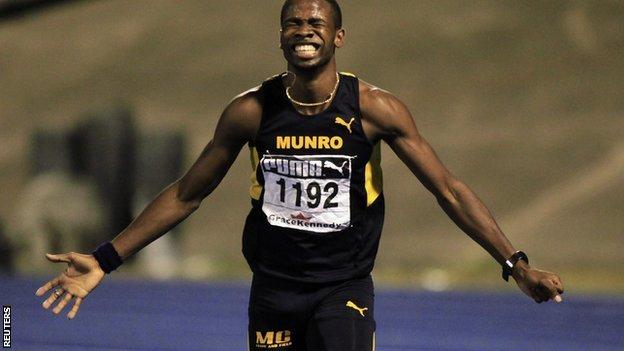 Sprinter Delano Williams has defended his decision to try out for Great Britain, because his native Turks and Caicos Islands are not eligible for London 2012.

As a British Overseas Territory, citizens can obtain a British passport and he plans to use his to compete.

"Turks & Caicos do not have an Olympic committee," he told BBC Radio 5 live.

The 100m and 200m runner added he found London "pretty cool" on his only past trip to the United Kingdom.

Jamaica-based Williams received his passport on 31 January and his Olympic future will be decided next time he travels the 7,000 miles to Britain for the Olympic trials in June.

The 18-year-old will go up against the likes of James Ellington, Marlon Devonish and Christian Malcolm to seal a spot on the 200m team.

Olympic rules state a maximum of three 'A' standard athletes - a qualification Williams reached after he clocked a personal best 20.53 secs at a meeting in February - or one 'B' standard athlete can compete for each nation at a sprint event.

Selectors have been criticised for choosing athletes who have switched nationalities in order to represent Britain at this summer's Olympics, but Williams vowed to ignore these calls.

"Yes, there is a lot of criticism going round but I am not focusing on that. I block out the negativity and do not worry about what people say," he told 5 Live's London Calling programme which is to be broadcast at 2130 BST on Thursday.

"I just perform my best and do what I have to do."

His time is, however, faster than those set by the veteran pair in 2011 and would have been good enough to finish sixth at the Beijing Olympics in 2008.

Williams's potential was underlined when he claimed the 100m title at Jamaica's Inter-Secondary School Boys and Girls Athletics Championships at the end of March, an event previously won by Asafa Powell and current Olympic gold medallist Usain Bolt.