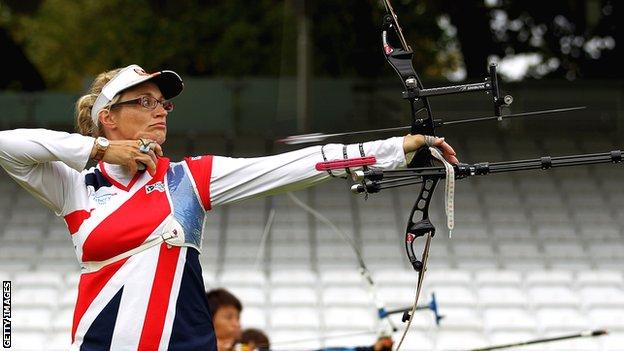 The quartet clinched the top two spots in the men's and women's categories to gain automatic selection with a further place to be picked by selectors.

Alison Williamson, 40, is fancied to make a sixth straight Olympics after finishing ahead of Charlotte Burgess.

Alan Wills and Michael Peart will also learn their fate on 9 May at Lord's.

Two-time Olympian Godfrey topped the men's standings on the third and final selection weekend ahead of Terry, who took double bronze in the Barcelona Games as an 18-year-old.

"It feels awesome, I must admit," Terry told BBC Sport. "It's been going well this year. I'm trying to keep things the same as I always have done - not get too excited about it all. I've a bit of an unorthodox way of looking at the sport, I try not to get too stressed."

Oliver will make her Olympic debut after winning the women's section from Folkard, with Williamson, who won bronze at Athens in 2004, in third.

"I'm really excited to get the result," said Oliver. "I've been wanting to shoot for Great Britain since 2006. After doing the test event, it was an amazing experience. Lord's is an amazing ground."

Archery GB performance director Sara Symington said: "We've had three days of outstanding archery from eight very talented archers, and they can all be very proud of themselves.

"Obviously, I'd love them all to be able to compete at the Olympics but there's only six places and those who have made it have done so under considerable pressure and against superb opposition.

"Not only that, they've done it in a multitude of weather conditions over the past three days - driving rain, hail storms, wind, and sunshine too."