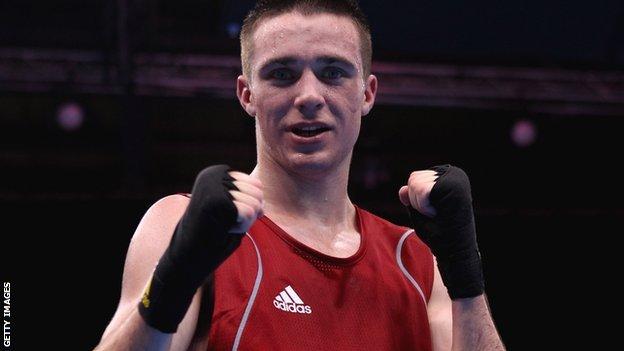 Lightweight Josh Taylor has qualified for the Olympics, ensuring there will be one Scot in the GB boxing team.

Taylor will fight in the 60kg division after reaching the semi-finals of the final European qualifying event, coupled with Sam Maxwell's defeat.

Middleweight Anthony Ogogo, who won a thrilling contest on countback, and light-heavyweight Callum Smith box for qualifying places on Friday.

But Warren Baister lost, meaning GB will not have a heavyweight in London.

To reach the last four in Trabzon, Turkey, Taylor had a 17-9 win over Armenia's Vladimir Sarukhanyan, while England's Maxwell lost against home favourite Fatih Keles.

And coach Terry McCormack hopes he can emulate Dick McTaggart, the last Scottish lightweight to go to the Games, who won gold in 1956 and bronze in 1960.

"It is an absolutely fantastic achievement and the result of three years of non-stop hard work from Josh," said McCormack.

"We moved him down to lightweight and there has been no stopping him. He can really punch and as a southpaw he must be a nightmare to fight.

"It is amazing to get a Scottish boxer into the team for the London Olympics. Boxing has come a long way since Dick McTaggart but there is no reason why Josh cannot go on to reach the same kind of level."

Lowestoft boxer Ogogo beat Jaba Khositashvili of Georgia on countback after a 14-14 draw, having started the last round six points behind.