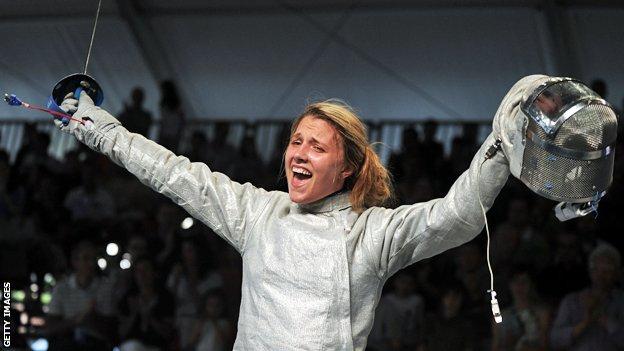 She defeated Greece's Vassiliki Vougiouka 15-14 in the women's sabre final at the European Fencing Championships in Legano, Italy.

Mon 02 Apr 12: Olga Kharlan is a step closer to London 2012 after finishing third in the Olympic qualification rankings.

Ukraine will need to formally select Olga to compete but she has effectively qualified for the London Games.

Sat 15 Oct 11: Olga Kharlan came away from the World Fencing Championships with one silver and a bronze medal.

The sabre specialist won individual bronze and helped Ukraine to silver in the team event at the tournament in Catania, Italy.

She beat Poland's Aleksandra Socha 15-10 to claim the women's title at the European Fencing Championships in Sheffield.

"Every competition this year is very important, and the Euros are one of those important events. I prepared hard for these championships as they're really important for Olympic qualification," Olga told the BBC.

"I have got a lot for my age," she admitted. "My grandfather says I already have what they didn't manage to get in their whole lifetime, but I will keep striving for more".

Wed 17 Nov 10: For the second week in a row Olga lost to Mariel Zagunis, this time at the Fencing Masters NYC event.

Thu 11 Nov 10: Olga was part of the Ukrainian team that won silver in the team sabre event at the World Fencing Championships.

Sat 06 Nov 10: Olga Kharlan has won silver in the women's sabre event at the World Fencing Championships in Paris.

She beat Irene Vecchi (15-6), Sophia Velikaia (15-9) but lost to the reigning Olympic and world champion Mariel Zagunis 15-11 in the final.