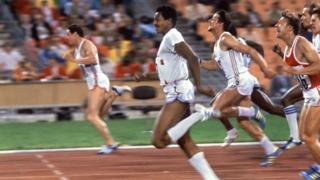 Britain's Alan Wells wins the 100m title at the 1980 Moscow Olympics, his perfectly timed dip ensuring Gold in a photo-finish.

Both Wells and Cuban runner-up Silvio Leonard were credited with the same time of 10.25 seconds, but the Scot was awarded victory.

Wells took advantage of an American boycott of the Games to claim Britain's first Gold in the event since Harold Abrahams in 1924.