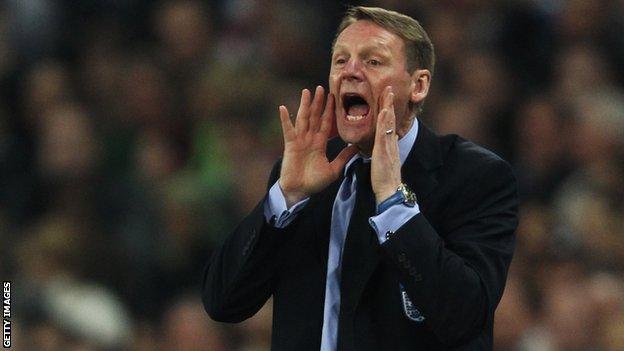 Team GB will find out their Olympic football opponents on Tuesday with the draw for both events held at Wembley.

Stuart Pearce's men's side and Hope Powell's women have been named among the top seeds for the tournament.

In the men's competition there are 16 teams, with Senegal claiming the final place after a play-off win over Oman on Monday, and 12 in the women's.

Sides know the dates of their three group games but will discover their opponents at the draw.

Countries from the same confederations will also be kept apart in the group stage.

Britain's women will take part in the first match, at the Millennium Stadium in Cardiff on 25 July - two days before the Games opening ceremony - with the finals at Wembley on 9 and 11 August.

The draw will be hosted by Match of the Day presenter Gary Lineker and will be live on the BBC Sport website.

During the competition, matches will be played at Hampden Park (Glasgow), Sports Direct Arena - to revert to St James' Park during the Games (Newcastle), Old Trafford (Manchester), the City of Coventry Stadium (otherwise known as the Ricoh Arena), the Millennium Stadium (Cardiff) and Wembley (London).

The 16 teams in the men's competition will be split into four groups, with the top two in each group advancing to the quarter-finals.

Pearce's men will begin their campaign at Old Trafford on Thursday 26 July, followed by a game at Wembley on Sunday 29 July and their final group match at the Millennium Stadium on Wednesday 1 August.

More than 50,000 tickets have been sold for the opening game at Old Trafford and a double-headed friendly is expected to take place ahead of the tournament at Middlesbrough's Riverside Stadium.

The Football Association has yet to confirm the line-up but GB's men are thought likely to take on Brazil in the warm-up. It could take place on 20 July and may also feature the women's team facing Sweden.

David Beckham remains in the hunt for one of the three over-age spots, while Joe Cole, Scotland's Steven Fletcher and Wales forward Craig Bellamy are also understood to be in contention.

The final 18 will be chosen after the England squad for Euro 2012 has been selected, with no players who make the journey to Poland and Ukraine being eligible.

Although representatives from all four Home Nations are in line to be selected, the Welsh, Scottish and Northern Irish Football Associations oppose the concept of a united Great Britain team, fearing a loss of identity in the international game.

Notable absentees from the men's competition are Argentina, who won the gold medal in the last two Olympics.

The two top teams from the 2011 Sudamericano Sub-20, a competition for under-20 sides, qualified for the tournament and Argentina miss out on London 2012 after they finished third behind Brazil and Uruguay.

Great Britain automatically qualified as hosts, with the 2011 European Under-21 Championship deciding the three qualifiers from Europe (Spain, Switzerland and Belarus).

Similarly, qualification events were held around the world for other federations. Asia and Africa both supplied three teams, plus an extra team from a play-off between the fourth-ranked teams of each.

Oceania provided one team, and two sides from North and Central America complete the 16-team tournament.

The 12 teams in the women's competition are split into three groups, with the group winners and runners-up joined by the two best third-ranked teams in the quarter-finals.

After their Millennium Stadium opener, Hope Powell's side will play again in Cardiff on Saturday 28 July, with their final group match on Tuesday 31 July at Wembley.

Powell will be without regular England captain Faye White, who announced her international retirement last week.