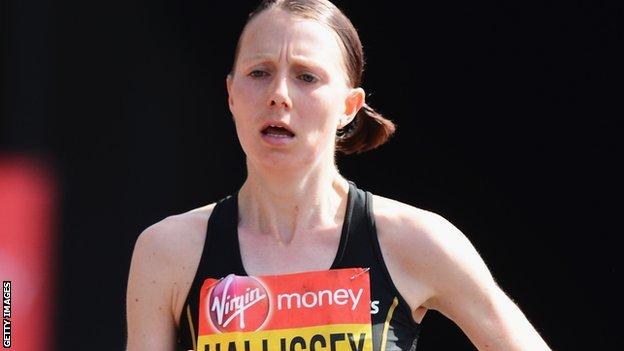 Britain's Claire Hallissey has been rewarded for her "all or nothing" performance in Sunday's London Marathon with a place at the 2012 Olympics.

The 29-year-old set a new personal best of two hours, 27 minutes and 44 seconds to be the first Briton home in 11th.

Paula Radcliffe and Mara Yamauchi had already been selected for the marathon.

Scott Overall and David Webb are the only British men in the race after Lee Merrien ran 2:13.41 in London to miss out on the Olympic qualifying standard.

Merrien's time represented a new personal best but was more than a minute slower than the Olympic 'A' standard of 2:12.00.

A matter of courses

Overall ran the qualifying time in Berlin last year, while Webb earns a place at the Olympics by virtue of finishing in the top 20 at the World Championships in Daegu.

"I'm delighted to be selected," said Webb. "I'm going to work extremely hard over the coming months to be in the best possible condition to compete well at the Games."

Hallisey staked her claim for a place by running 40 seconds quicker than the time set last year by Jo Pavey, who opted to sit out this year's race.

"I'm absolutely thrilled," said Hallisey. "I think it's still sinking in. I'm very, very happy. It's a dream come true, it's what you aspire to, getting on to an Olympic team."

Pavey defended her decision not to run in Sunday's race, saying: "People maybe misunderstood why I didn't run in London.

"I would have liked to but I wanted to be in the best shape for the Olympics and the recovery time is not long enough for me to perform well at the Games.

"Partially it's a weight lifted off my mind because now I know what I have to focus on. I'll turn my attention to the 5,000 and 10,000m and trying to qualify on the track."

Team GB chef de mission Andy Hunt added: "I am delighted to welcome Claire and Dave to Team GB to make their Olympic debuts in London.

"The group of five Team GB marathon athletes now includes an excellent blend of up and coming runners with greatly experienced athletes."