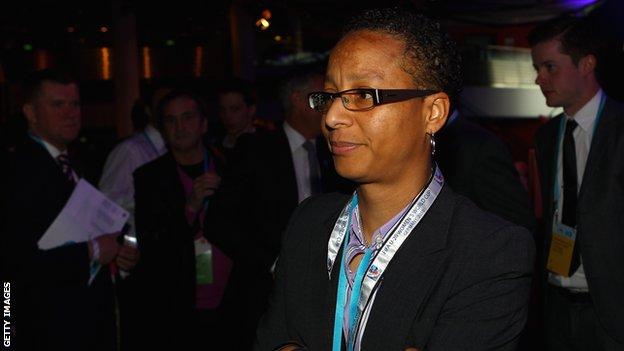 Coach Hope Powell believes Great Britain's women's team "have every chance of progressing" to the knockout stage at the 2012 Olympics.

Powell's team will face Cameroon, Brazil and New Zealand in the group stages and will play the Kiwis in the very first event of the Games.

"We can't take it lightly. Now it's down to our preparation," said Powell.

"Brazil are undoubtedly the tough team in the group, they're always there or thereabouts in major tournaments."

But Powell warned that neither New Zealand or Cameroon could be discounted.

"We [England] played New Zealand in the World Cup last year and it was a very tough encounter. Cameroon are an unknown quantity," said the 45-year-old.

She added that the team is "really excited" at the prospect of playing in the opening event of the Games.

And she continued: "This gives us a great opportunity to showcase our sport. Hopefully we can encourage more females to get into the sport."

Powell's side kick off the Olympics with their match against New Zealand on 25 July at the Millenium Stadium in Cardiff.

They will then face Cameroon at the same ground on 28 July, before their final group match against Brazil at Wembley on 31 July.

The three group winners and runners-up, plus the two best third-ranked teams, will advance to the quarter-finals.

Doncaster Rovers midfielder Sue Smith, who has 93 England caps, said: "It is a really interesting group and one we can definitely get out of.

"I think we are going to get through. Brazil is a tasty game - they play in a similar way to the men."