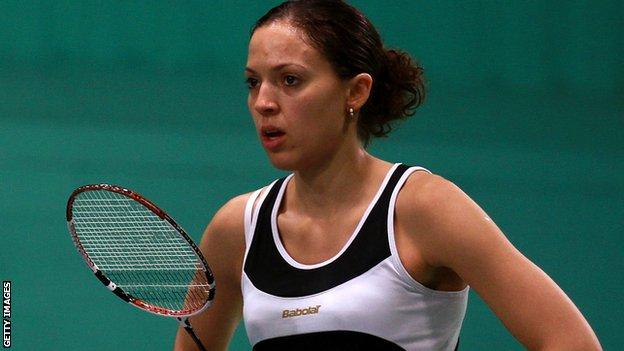 England number one Elizabeth Cann failed to reach the main draw of badminton's India Open, a result that damages her London 2012 hopes.

Cann beat India's Tanvi Lad in the first qualifying round, but lost 21-11, 21-11 to Thailand's Nichoan Jindapon.

This defeat meant Cann failed to narrow the gap on Scotland's Susan Egelstaff, her rival for a position in Team GB.

The India tournament is the last chance for players to improve their world ranking before the cut-off point.

Egelstaff went into the week 36th in the ratings while Cann, who grew up in Jersey, was in 50th.

Despite the disappointment in India, Cann, the English national champion, is expected to move up the rankings when the latest positions are released on Thursday after she reached the quarter-finals of the recent European Championships.

The placings a week later, on Thursday 3 May, will be used as a "base" to determine who goes to London 2012, but a spokesperson for Badminton England said there are "other criteria that are considered as part of the decision process".

The final Great Britain squad will be announced at the end of May.

Egelstaff also crashed out of the India Open in the early stages, losing 21-19, 21-7 to eighth seed Ji Hyun Sung in the first round.

That still earns the Scot 2,220 points, which looks like keeping her ahead of Cann, but both players must now wait to see what the selection panel decide.