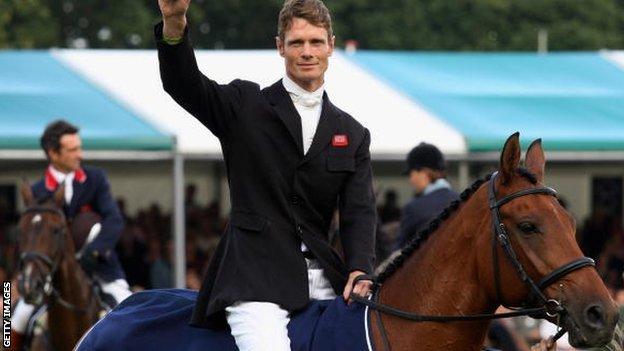 Britain's William Fox-Pitt will continue his bid for eventing's Grand Slam when the current Burghley champion competes at Kentucky this weekend.

The eight-time British number one will ride Parklane Hawk, his mount from last year's triumph at Burghley.

"It is all about Kentucky this week, and then we'll focus on Badminton," said Olympic medallist Fox-Pitt.

The £220,000 Grand Slam prize is awarded for consecutive wins at Kentucky, Badminton and Burghley.

The capture of three-day eventing's trio of four-star events can be completed in any order so long as the rider holds all three at once, a feat only one rider has previously accomplished - Fox-Pitt's Team GB colleague Pippa Funnell, nine years ago.

"My main aspiration for the week is that Parklane Hawk consolidates his form from Burghley," added Fox-Pitt, 43, who won medals at the last two Olympics and has won six European team titles as well as World Championship team gold in 2010.

"The training has gone to plan, and so far it has been hitch-free. The horse has had three good runs, and he's on good form for the States."

This year's Badminton Horse Trials take place from 3-7 May. The London Olympic competition, being held at Greenwich Park, begins with team dressage on 1 August.