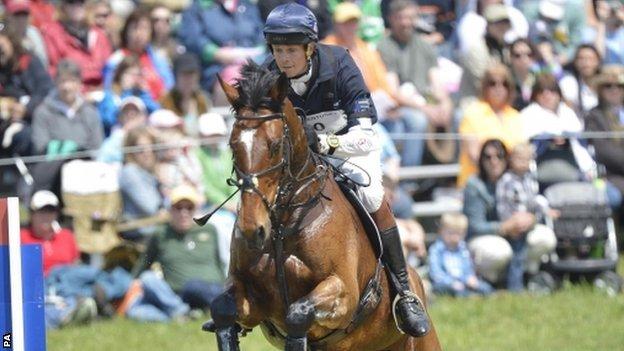 Britain's William Fox-Pitt put in a strong cross-country performance on Parklane Hawk to lead going into the final day at Kentucky.

Fox-Pitt produced a clear round on board the 2011 Burghley champion to stay on 41.3 penalties.

He then watched as overnight leader Allison Springer and Arthur collected 2.8 time faults.

It put the American in second place, 1.3 penalties behind Fox-Pitt going into Sunday's showjumping finale.

A clear round there would earn Fox-Pitt his second win in three years in the event.

A victory would also keep him on course for the £220,000 Grand Slam prize awarded for consecutive wins at Kentucky, Badminton and Burghley, with Badminton to come next week.

Assessing his round, Fox-Pitt said: "You've just got to really believe that you are riding a very good horse with good form, and I was right to think that. He really ate the course up and came home easily in the time.

"He is quite feisty and he can have opinions of his own. Once or twice turning was a little bit untidy, but maybe I am being fussy. He was damn good.

"He gave me some ride. He is pure class. I was down [on time] at the beginning, but I knew that 15 seconds down on a horse like that is irrelevant.

"We just gradually crept back up, and by nine to 10 minutes we were spot on and I just cantered home really."

But Fox-Pitt's fellow Britons Lucy Wiegersma and Oliver Townend were out of luck - Wiegersma and Granntevka Prince were eliminated while Townend retired Pepper Anne two from home after accruing 60 jumping penalties.