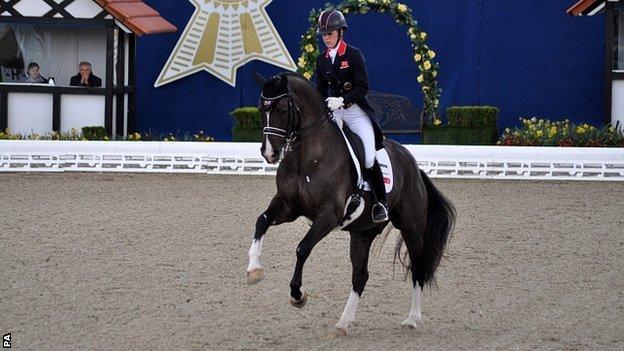 The 25-year-old smashed the previous best by 3% during Sunday's event in Hagen, Germany.

Dujardin, who trains with world number two Carl Hester at his yard just outside Newent, scored 88.022% aboard her Olympics-bound horse Valegro.

More about the GB team from British Dressage

The Gloucestershire-based world number five only competed in her first grand prix competition 15 months ago.

Her world record earned her a standing ovation as she surpassed the previous world best held by Dutch rider Edward Gal and the £10m black stallion Totilas.

Dujardin won the World Cup event at London's Olympia in December and was part of the Great Britain team that won European gold in Rotterdam last summer.

She was part of a powerful quartet alongside Hester, Laura Bechtolsheimer and Emile Faurie.