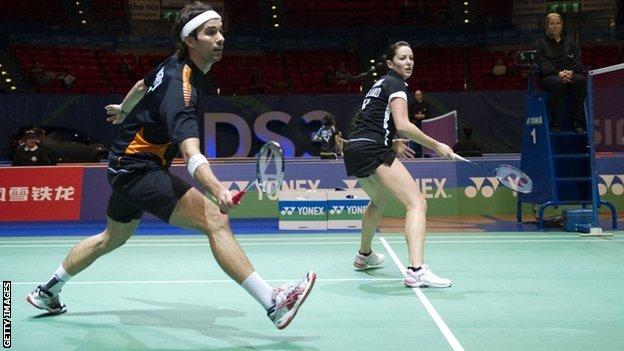 Chris Adcock and Imogen Bankier deserve their chance at London 2012 according to Nathan Robertson, who is likely to be denied another attempt at Olympic gold by the mixed doubles pair.

Robertson and Jenny Wallwork were beaten by the duo last week, missing the chance to close the rankings gap.

"I'll be there to support them now. They've got a great chance and have beaten the best pairs in the world."

Victory would have seen Robertson and Wallwork considerably close the gap in the world rankings between themselves and the other pair at the European Championships, but they instead went down 18-21 21-19 22-20 in the quarter-finals.

Bankier and Adcock currently lie 10th in the world order, eight places better than their compatriots.

The 34-year-old, who plans to retire if he misses out on selection, added: "You see a lot of players come and go and there has been a change of guard in badminton."

In the 5 live interview, conducted by his former mixed doubles partner Gail Emms, Robertson said that the change in the domestic badminton set-up had affected his career.

"I was used to certain coaches for a long time," continued Robertson, who won world gold and Olympic silver gold with Emms.

"A couple of coaches left and there was a new head coach. I thought I would have had the same treatment as I had with old coaches. I won't look back at that with good memories. We could have got more out of my partnership with Wallwork.

The Nottingham-born player is also romantically involved with his playing partner, and admitted that their relationship has suffered at times in the battle to reach the Olympics.

"This year it's been tougher, with ups and downs in qualifying taking its toll on and off the court. We've come through that and when I stop playing I'll be happy to support her in her career."