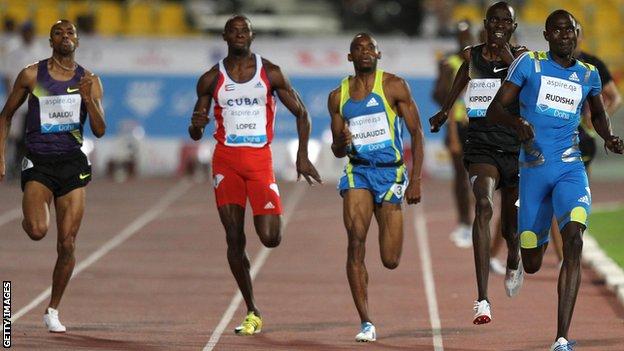 ATHLETICS - Diamond League, Doha (11 May); Doha hosts the first major outdoor event of 2012 as the Diamond League season gets underway. Among those in action are 800m world record holder David Rudisha of Kenya, while Jamaican sprinters Asafa Powell and Nesta Carter aim to make an early impression in the absence of team-mates Usain Bolt and Yohan Blake. Live coverage on the BBC red button, 1700-1900 BST

TRIATHLON - ITU World Series, San Diego (10-12 May); last month's opening round in Sydney saw GB's world champion Helen Jenkins finish second behind Erin Densham of Australia. She continues her build-up to London 2012 in this second round, as does men's medal hope Jonny Brownlee, although brother Alistair is still recovering from injury.Coverage on the BBC red button.

MODERN PENTATHLON - World Championships, Rome (7-13 May); GB is sending a team of seven to Italy and, with only four Olympic places available, there is more than a World Championship medal at stake. Heading Britain's bid are Mhairi Spence and Nick Woodbridge, both of whom are ranked in the world's top 10. Follow Mhairi Spence on Twitter.

CANOE SLALOM - European Championships, Augsburg, Germany (11-13 May); Great Britain's recently-selected Olympic team travel to Germany, along with some of those who just missed out on a London 2012 place, including Athens silver medallist Campbell Walsh. Follow David Florence on Twitter.

CYCLING - ROAD - Giro d'Italia, Denmark/Italy (5-27 May); the 95th Giro d'Italia continues with Mark Cavendish - riding for Team Sky - targeting the pink jersey and victory in the team time trial. He has a strong team riding with him, including Geraint Thomas. Follow Mark Cavendish on Twitter.

CYCLING - BMX - Supercross World Cup, Papendal, Netherlands (12-13 May); the latest World Cup meeting is a chance for elite riders to find some form ahead of the World Championships in Birmingham later this month.

The 26-year-old was at a training camp in Flagstaff, Arizona, where he was reported to have suffered a cardiac arrest.

Dale Oen, a silver medallist at the Beijing Olympics, was expected to feature prominently in London this summer.

An autopsy found no conclusive cause of death.

Silvers came courtesy of the men's eight (who were without injured stroke Constantine Louloudis), the men's pair (featuring rising young stars George Nash and Will Satch), the men's double sculls (Sam Townsend and Bill Lucas) and the women's lightweight double (Sophie Hosking and Katherine Copeland), the men's lightweight four, and Alan Campbell in the single sculls

A number of top boats from Australia, New Zealand and elsewhere were absent but GB performance director David Tanner told BBC Radio 5 Live: "It couldn't be a much better start to our Olympic campaign. I think it's probably a little bit above my expectations, to be honest. It's great."

There are two more World Cup regattas - in Lucerne later this month, and in Munich in the middle of June.

Kiteboarding will make its Olympic debut at the 2016 Games in Rio after the International Sailing Federation (ISAF) dropped windsurfing.

The decision has been met with surprise and frustration within windsurfing and an online petition has been set up to keep it as an Olympic discipline.

British sailing's John Derbyshire said: "We're disappointed for windsurfing [but we are] looking forward to working with kiteboarders to develop the talent pathway for this new event."

Britain's Bryony Shaw, who won bronze in Beijing at the 2008 Olympics, said on Twitter: "Windsurfing is me... I am windsurfing!" before adding: "My focus on London now seems heightened!! New discipline for Rio... New challenge...!"

But the result was tempered by an ankle injury to goalscorer Crista Cullen and Alex Danson picking up a serious-looking shoulder problem.

"Crista will be fine. Alex? Who knows," said coach Danny Kerry, whose side did not concede a goal in four matches.

Kerry now heads into a major Olympic selection meeting with a question mark over the fitness of his leading striker.

GB's men beat India 2-1 to take the bronze medal while Germany won the final with a 5-2 win over Australia.

But they also suffered an injury blow when experienced forward Simon Mantell fractured a metatarsal in an earlier match with India.

Usain Bolt ran the fastest time of the year in his first 100m race of 2012 at the Jamaica International Invitational.

Larry Achike was second in the triple jump, Tiffany Porter finished third in the 100m hurdles, and Andy Turner was fourth in the 110m hurdles

Elsewhere, Britain's Katarina Johnson-Thompson achieved the Olympic 'B' standard in the heptathlon at an event in Desenzano, Italy, breaking the national junior record set by Jessica Ennis.

Katy Burke, Kate French and Katy Livingston finished behind Germany and China on the opening day in Italy.

The championships represent the final qualification event for places in the London Olympics this summer.

British athletes must finish in the top three in the individual competitions to achieve the qualifying standard.

Great Britain's taekwondo team secured their best medal haul at a European Championships, with seven in all, as Martin Stamper and Caroline Fisher won bronzes on the final day.

Golds for Aaron Cook, Michael Harvey and Lutalo Muhammad, plus bronze's for Amin Badr and Jade Jones earlier in the event meant GB finished top of the male medal standings and as the second best nation overall in Manchester.

Great Britain performance director Gary Hall was thrilled with his squad's performance: "To set a new British record is a brilliant performance by the athletes and all of the staff," he said.

"We set out to beat the Turks as they hadn't lost in 20 years and so to get the number one slot for the men was phenomenal," he added

The next task for Hall is to select the four athletes he wishes to take to the London 2012 Olympics.

Great Britain's women completed their programme at the Olympic test event with an 11-4 defeat by Hungary to finish last in the four-team competition.

The squad were not able to recreate the intensity they displayed during their creditable 7-6 defeat by one of the Olympic favourites United States on Saturday and, after conceding a couple of early goals, were never able to close the gap on a Hungarian side who recorded their second victory over the host nation in three days.

The Team Sky rider triumphed in a bunch sprint on Sunday's second stage, which was his earliest ever victory in one of the three Grand Tours.

But he was left in agony a day later when he was brought down by Roberto Ferrari during a sprint finish in the 190km third stage in Horsens, Denmark.

Cavendish said the Italian should be punished and "ashamed".

Cavendish, who crossed the finish line on foot, did not break any bones.

He wrote on Twitter: "Crashing at 75kph isn't nice. Nor is Ferrari's manoeuvre. Should be ashamed to take out pink, red & world champ jerseys."

Team Sky sports director Steve De Jongh said Cavendish had "lost a lot of skin, but he is OK. It looks like nothing is broken."

A nine-year-old girl has officially opened the 2012 Olympics stadium, at a ceremony in east London.

Niamh Clarke-Willis joined Locog head Lord Coe to hit a button which launched balloons into the sky above the venue for this summer's Games.

Around 40,000 members of the public were at the Olympic Stadium in Stratford to witness the opening, which included a laser light show.

The "2,012 hours to go" event tested the park's management and security.