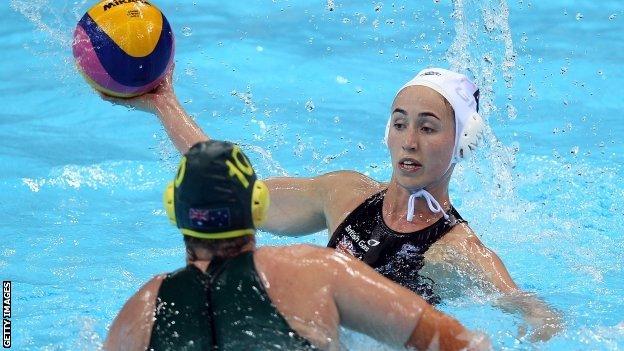 Great Britain's women lost their opening match in the Olympic Water Polo Arena 10-4 to Australia, but gave a spirited performance against one of the favourites for gold at London 2012.

But Team GB proved tougher proposition in front of a home crowd on the opening day of the sport's test event.

Chloe Wilcox scored Britain's first goal at the new venue but her side could not exploit several powerplays.

Australia took their chances to establish a 6-3 lead after three quarters before showing their class in a one-sided final period.

Despite the defeat, Great Britain goalkeeper Rosie Morris enjoyed her first experience of the Olympic Arena.

"It was absolutely incredible - the crowd were so noisy and the pool felt great. Every time I made a save or we scored the atmosphere was amazing," she told BBC Sport.

"It was so inspiring to have that when you're in the water. Home advantage like this will really help us to get some good results."

Great Britain next face Hungary, who lost their opening match of the tournament 11-6 to the United States, on Friday.