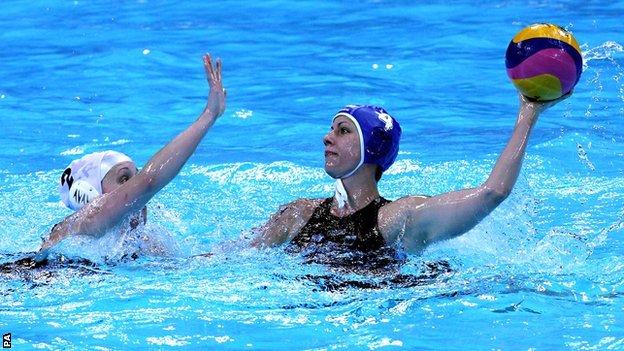 Great Britain women's hopes of a gold medal in the Olympic test event were ended with a 17-10 defeat by Hungary.

Both teams lost their opening matches on Thursday and a noisy sell-out crowd saw an even first quarter.

But the Hungarians effectively settled the contest with four unanswered goals in the second quarter.

Although Team GB did briefly rally in the second half, they never managed to get close enough to their opponents to set up a grandstand finale.

Hungary centre-forward Ildiko Toth produced the best personal performance of the tournament so far by netting five goals but Great Britain's Lisa Gibson managed four of her own and was delighted with her achievement on the biggest stage.

"It is the most amazing feeling," she told BBC Sport. "The crowd were phenomenal - I don't think they realise how much they pump us up when they get behind us, it is incredible and gives us that extra edge.

"I don't think the scoreline was a fair reflection of the play. I think we played really well but we know we can make improvements and when it's time for the Olympics we'll be ready."

In the night's other match USA won a thrilling contest 10-9 against Australia. The Americans now meet Team GB on Saturday and Gibson - who was schooled in Portland, Oregon - is looking forward to it.

"I personally have never played them so I can't wait," she said.

"Our family went to live out there due to my dad's job and that's how I got into the sport in the first place, but I'm really proud to be British and be part of this team."