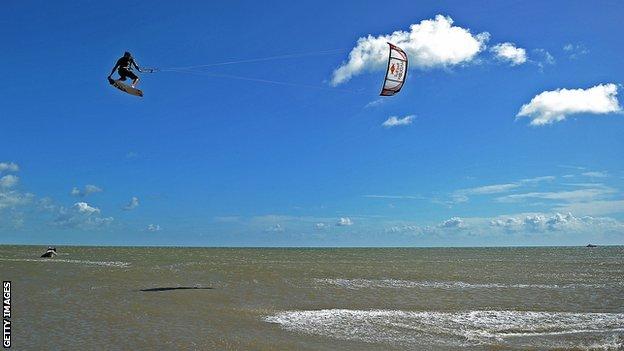 Kiteboarding will make its Olympic debut at the 2016 Games in Rio after the International Sailing Federation (ISAF) dropped windsurfing.

The decision has been met with surprise and frustration within windsurfing and an online petition has been set up to keep it as an Olympic discipline.

"[But we are] looking forward to working with kiteboarders to develop the talent pathway for this new event."

The decision was made by the ISAF at a meeting in Italy on Saturday and Derbyshire added: "While an exciting prospect for a new discipline, the decision to replace windsurfing will of course be a huge blow to the windsurfing community.

"We're disappointed for all those who are working at the coal face of the Royal Yachting Association's windsurfing programmes to deliver activity and British success on the world stage who will be affected most by this decision."

However, he added: "Kiteboarding made a solid case for its Olympic inclusion at the March trials and, although a surprise that ISAF has voted it into the Olympic programme at this stage, it appears they wished to seize the opportunity, rather than wait until 2020."

Britain's Bryony Shaw, who won bronze in Beijing at the 2008 Olympics, said on Twitter: "Windsurfing is me... I am windsurfing!" before adding: "My focus on London now seems heightened!! New discipline for Rio... New challenge...!"

Compatriot Nick Dempsey, who was fourth in the men's event four years ago, commented on Twitter: "Wow, unexpected. That was a big decision and a very sad day for windsurfing. My heart goes out to all the aspiring champions and kids with dreams of windsurfing at the Olympics."

Meanwhile, following sailing equipment trials held in Santander, Spain in March, the 49er FX was chosen for the new two-person women's skiff discipline while the Nacra 17 will be used in the two-person mixed multihull event.