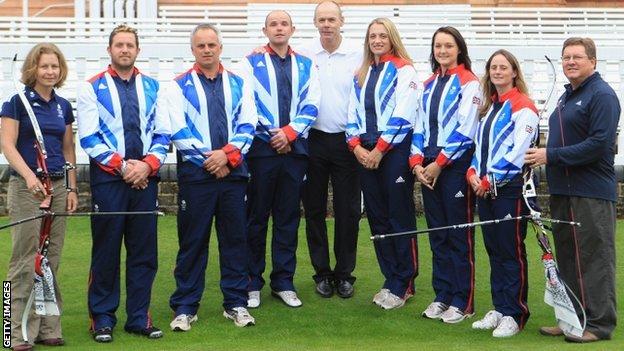 Alison Williamson will compete in her sixth successive Olympic Games this summer after being confirmed as a member of Team GB.

The 40-year-old, set to become only the third Briton to achieve the feat, has been picked as a wild-card entry by performance director Sara Symington and Olympic coach Lloyd Brown.

"I'm thrilled and proud to have made it to my sixth Olympics," said Williamson.

"It makes all the sacrifices and hard work over many years worthwhile."

Williamson, who made her Olympic debut in Barcelona in 1992, added: "I can start to look forward to the enormous honour of representing my country at a home Olympic Games. It just doesn't get any better."

She joins Naomi Folkard and Amy Oliver as Team GB's representatives in the Olympic women's tournament at Lord's.

The Athens bronze medallist will be one of 64 archers bidding for gold in the individual tournament and will line up with Folkard and Oliver in the team tournament.

Alan Wills, Larry Godfrey and Simon Terry, who won gold in the recurve team event at the Antalya World Cup last weekend, will represent Team GB in the men's tournament between 27 July and 3 August.

Williamson and Wills missed out on automatic selection after finishing third in last month's qualifying shoot-offs.

Symington hailed the quality of the British team and insisted the six archers were fully prepared to challenge for medals at the Games.

She said: "We have an extremely experienced squad who have had to work very hard to fight off determined competition for a place at the Games.

"It's a great achievement by all six archers to maintain such high levels of consistency over a long time and to fend off their rivals."

Only javelin thrower Tessa Sanderson, who competed in each Games between 1976 and 1996, and fencer Bill Hoskyns, between 1956 and 1976, have previously appeared in six successive summer Olympics for Great Britain.