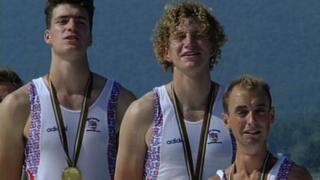 British rowing brothers Jonny and Greg Searle win the coxed pairs at the 1992 Barcelona Olympics with coxswain Garry Herbert, whose tears on the rostrum became a defining image of the Games.

Their victory was achieved in dramatic style, overtaking Italy's Abbagnale brothers in the last few metres to snatch an unlikely win.