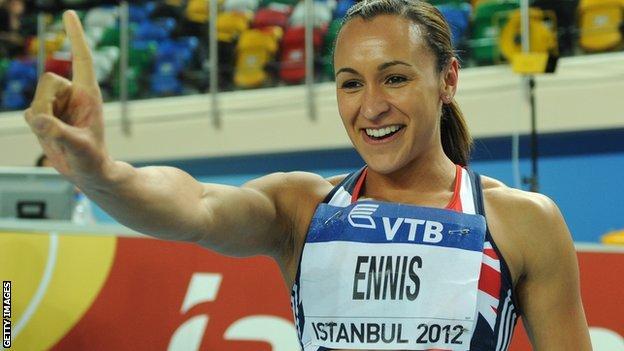 Jessica Ennis and Dwain Chambers head the British challenge at the Great CityGames in Manchester on 20 May.

Chambers, 34, racing for the first time since learning he would be eligible to compete at London 2012, is in the 150m against American Wallace Spearmon.

Turner is attempting to win the 110m and 200m hurdles for a third successive year, but he is up against David Payne, the 2008 Olympic 110m hurdles silver medallist.

He said: "With David lining up against me and a hat-trick in my sights, this promises to be a really hard one to win.

"Hopefully my experience of street racing will help me to produce another good performance."

Bleasdale, who was third in the World Indoor Championships earlier this season, will compete in a specially-erected arena in Manchester's Albert Square.

The sprints will take place on a specially constructed track on Deansgate in the city centre.

Chambers faces Marlon Devonish, who is the fastest Briton over the unusual 150m distance, 100m silver medallist Francis Obikwelu of Portugal and Spearmon, who has promised to attack the US record on 14.51 seconds, set by Tyson Gay last year.

Jamaica's Usain Bolt set the record of 14.35 seconds at the inaugural meeting in 2009 and five days after the Manchester evnt, Chambers will step up his bid for Olympic selection by facing the triple Olympic gold medallist in the Czech Republic.

The Manchester meeting will also see American Sanya Richards-Ross, one of the favourites for Olympic gold over 400m, compete over 200m against a field which includes Britain's 2007 world silver medallist Nicola Sanders.

The Great CityGames in Manchester will also feature the 10km Great Manchester Run, with Ethiopia's Haile Gebrselassie chasing a fourth successive victory, and be televised live on BBC2.