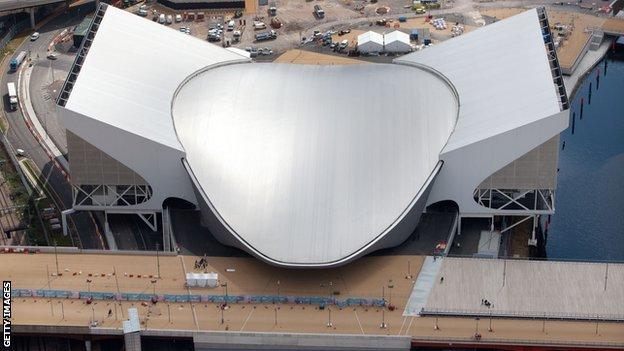 The Aquatics Centre was designed by Zaha Hadid and offers a spectacular sight on entering the Olympic Park.

"I've seen so many venues in my life but I had a visual shock - this is unique, state of the art," he said when visiting it last year.

Its wave-like roof, comprising 3000 tonnes of steel, is accompanied by two temporary extensions on either side.

Inside it boasts two 50m swimming pools - one for competition and one for warm-up - as well as a 25m pool for the diving events.

The venue was designed before London won the Olympic bid and yet it was the last of the venues to be completed. Its original £75 million budget escalated to over three-and-a-half times that amount.

The Aquatics Centre will open to the public in 2014. The price of a swim at the Olympic venue is expected to be no more expensive than at a local leisure centre.

The extensions on either side of the venue - which were not part of Hadid's original design - will be removed, leaving a greatly-reduced capacity of 2,500.