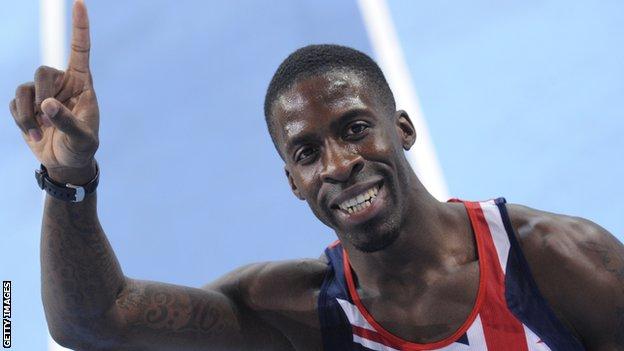 ATHLETICS - Great CityGames, Manchester (20 May); Dwain Chambers makes his first appearance on home soil since having his Olympic ban overturned. The British sprinter will race over 150m on a specially-constructed track in Manchester's city centre. Others to look out for include Jessica Ennis in the 100m hurdles. Live coverage on BBC2, 1530-1700 BST

ATHLETICS - Diamond League, Shanghai (19 May); Great Britain's Phillips Idowu comes up against one of his main rivals for Olympic gold, triple jump world champion Christian Taylor of the USA. The biggest roar of the evening is likely to come in the 110m hurdles, where China's 2004 Olympic champion Liu Xiang faces world champion Jason Richardson. Live coverage on the BBC red button, 1300-1500 BST

BOXING - Women's World Championships, Qinhuangdao, China (9-20 May); Great Britain's top female boxers try to secure Olympic qualification in China. Flyweight Nicola Adams, lightweight Natasha Jonas and middleweight Savannah Marshall will secure their Olympic place if they reach the semi-finals or are one of four Europeans in the quarter-finals. Follow the BBC's Jess Creighton on Twitter for regular updates.

DIVING - European Championships, Eindhoven (15-20 May); Tom Daley leads a strong GB team, hoping to regain the 10m platform title he won in 2008. He is not competing in the 10m synchronised platform as partner Pete Waterfield is resting a neck injury. The full GB team can be viewed here.

CANOE SPRINT - ICF World Cup, Poznan, Poland (18-20 May); the first of this month's two World Cup events is a chance for GB to qualify more boats for London 2012 and for individuals to impress the selectors. Of particular interest is the battle between Olympic K1 1000m champion Tim Brabants and Paul Wycherley, who beat him to selection for last year's World Championships. Follow Tim Brabants and Paul Wycherley on Twitter.

SAILING - Finn Gold Cup, Falmouth (13-18 May); the world championships for the Finn class have attracted 94 entries from 30 countries, including Ben Ainslie. Britain's three-time Olympic champion has already secured his place at London 2012 but for some sailors this is a final chance to win selection. Follow Ben Ainslie on Twitter.

TORCH RELAY, Great Britain (18 May-27 July) - having been lit in Olympia, Greece, the flame flies to Britain on Friday for a 70-day relay around the UK. It starts at Land's End on Saturday with the first torchbearer, three-time Olympic sailing champion Ben Ainslie. You can check the complete route here.

Jonny Brownlee and Helen Jenkins won the men's and women's titles at the San Diego World Series to make it a memorable weekend for Great Britain.

Brownlee - favourite for victory in the absence of elder brother and reigning world champion Alistair, who is recovering from an Achilles injury - controlled the men's race throughout to beat Switzerland's Sven Riederer by five seconds.

Tim Don, who is fighting for the final Great Britain spot in the Olympic team, finished seventh, with Will Clarke 20th, David McNamee 23rd and Adam Bowden 37th.

Helen Jenkins won the women's race in a time of 1:58.21 - over a minute ahead of Australia's Erin Densham - to consolidate her position as Olympic gold medal favourite. Vicky Holland was the next best-placed Briton in fifth.

Dwain Chambers finished a disappointing sixth at the Ponce Grand Prix in Puerto Rico in his first 100 metres race since being cleared to compete at the Olympic Games.

Trinidad & Tobago's Keston Bledman claimed victory in 10.12 seconds, with Chambers well back in 10.52.

He was also beaten by fellow Briton Tyrone Edgar, who was fourth in 10.42.

Mhairi's story is amazing: the transformation of her as a person and an athlete

Mhairi Spence effectively sealed her place at the Olympic Games in style by becoming the first British pentathlete to win the world title since Steph Cook in 2001.

With Samantha Murray taking bronze in Rome, three Britons have now achieved the Olympic qualifying standard, Freyja Prentice being the other. A decision on which two female pentathletes will compete in London will be announced on 8 June.

Spence, who considered quitting the sport in 2009, had started the final run/shoot in third place, 37 seconds adrift of triple world champion Amelie Caze, but she overtook the fading Frenchwoman with less than one kilometre to go. Former world champion Qian Chen took silver.

Olympic champions Iain Percy and Andrew Simpson had to settle for a silver medal at the Star World Championships.

The Britons missed out by two points to Brazilian great Robert Scheidt and his crew Bruno Prada in Hyeres, France.

Percy and Simpson led by five points going into the medal race but despite finishing one place in front of their rivals, the cushion was not enough.

"It's frustrating that we weren't able to finish it off, but this is just a battle, not the war," said the 35-year-old double Olympic gold medallist Percy.

Whelan, 19 and the 2010 and 2011 senior British champion, was successful on the beam and in the floor routine.

Her bronze on the beam was Great Britain's first ever medal in this discipline in a major championship.

The duo, who were recently selected on the GB Olympic team, had finished fourth in the final of the canoe double.

But they teamed up with London-bound Tim Baillie and Etienne Stott, as well as Adam Burgess and Greg Pitt for gold.

There was also bronze in the women's kayak single for Fiona Pennie, who missed out on Olympic qualification to Lizzie Neave.

Nick Skelton's tremendous start to 2012 continued when he won the Longines Grand Prix of La Baule in France.

It followed a recent grand prix victory in Antwerp, while the 54-year-old was also the star performer at this year's six-week Florida Winter Festival aboard his two Olympic showjumping prospects Carlo and Big Star.

Among the gold medallists was Ashley McKenzie, who clinched his fourth British Open title in the -60kg category.

The Londoner has since tweeted that he has been selected for the Olympic Games. The official team announcement is expected next month.

Triple jumper Christian Olsson, who won Olympic gold in 2004, will not compete at the London Games after announcing his retirement with a foot injury.

The 32-year-old, who also won two European titles as well as a gold medal at the 2003 World Championships, became known for his friendly rivalry with Britain's Jonathan Edwards.