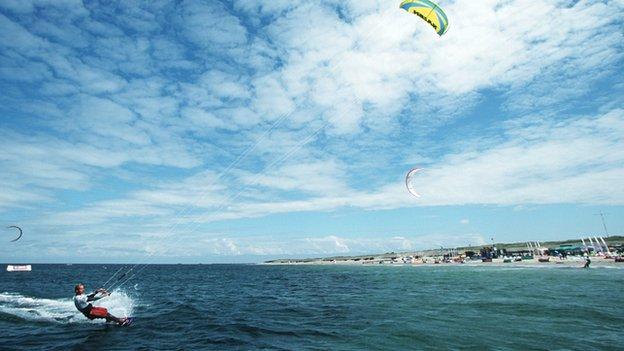 Kiteboard racing will make its Games debut at Rio in 2016 after the International Sailing Federation (Isaf) axed windsurfing last week.

"I know windsurfing's not gone for ever, absolutely," said Bridge. "Without windsurfing, kiteboarding wouldn't be where it is.

I texted my father, who is 68 and had a heart bypass recently, saying, 'you'd better stay alive for the next four years

"But it's important to get clear - they are two separate sports and both deserve to be in the Games. If they have to lose one of the sailing classes, so be it."

The windsurfing fraternity have been critical of the decision and thousands have signed an online petition to have it reinstated. Britain's Beijing bronze medallist windsurfer Bryony Shaw branded it the "death of the sport" and Athens bronze medallist Nick Dempsey said it was a "bizarre" decision.

But as one door closes, another one opens.

"I was stunned. I couldn't believe it," said Bridge. "I keep waking up thinking what a great thing this is, what an opportunity for the young and everyone involved all over the world. Suddenly there's a clear pathway."

The 39-year-old Bridge, who will defend her world title in Sardinia in October, was part of the group from the International Kiteboarding Association who lobbied Isaf and the International Olympic Committee to consider the sport and took part in the final evaluation trials in March.

"It became clear that what mattered was that kiteboarding was a sport that ticked lots of boxes," said Bridge. "It's accessible, it's easy to learn from a young age, it's quick, very visual and high impact, it doesn't cost much money, you can travel all over the world with the kit and you can do it in winds from six knots to 35 knots with the same equipment.

"It can also be done close to the beach - and there's that lifestyle thing with the sand between our toes - and not at a yacht club a million miles away. It's more accessible from a spectators' point of view."

Bridge, who juggles competing with running a kitesurfing and windsurfing school in Exmouth, Devon, with husband Eric and three young sons, says she fully intends to go for Rio despite the fact she will be 43.

Kiteboarding at the Olympics

"I've been in sailing all my life and I've been kiteboarding since the beginning. I don't see why I couldn't still be competitive, unless I get ill or injured.

"As an older athlete I think you also come to the table with a few unique qualities, ones you gain by getting by on your own."

Kitesurfing has its origins in the late 1970s and 1980s but it came to worldwide prominence when legendary big-wave surfer and windsurfer Laird Hamilton began kiting in Hawaii in the mid 1990s.

The "beginning" for Bridge was in 2000, when she began experimenting with a makeshift kite and an adapted windsurfing board at home in Devon.

"There was nobody teaching it, nobody knew anything about it," she said. "You couldn't look on You Tube, or ask a mate. It was all trial and error. We came from a coaching background so we knew how it should work but it was huge amounts of fun and danger, chasing each other around in a rib.

"For us it was fantastic - and I was a very keen windsurfer - but I wouldn't even think about windsurfing now. I haven't touched my kit for years."

Bridge estimates there are about 8,000 kiteboarders in the UK, a figure which is now likely to rise. She has already seen a trickle of Olympic class windsurfers at her school and Shaw has admitted she may cross over after the Games in Weymouth.

But soon Bridge may not even be the best in her family.

Her eldest son Oliver, who is now 14, started flying a kite at the age of five and last year came third in the youth world championships for under 19s.

"He has all the inherent skills - he's a good build and is good with the kite, plus he's really competitive," said Bridge.

"If he keeps up his level he is going to be unstoppable.

"The downside is I might not be competitive for him to train with so he'll probably have to go to the United States."

As windsurfing plots a return to the Games, kiteboarding is set to take off. And the idea of a British mother and son with medal prospects at Rio may just provide the launch pad.

"I texted my father, who is 68 and had a heart bypass recently, saying, 'you'd better stay alive for the next four years'," said Bridge.