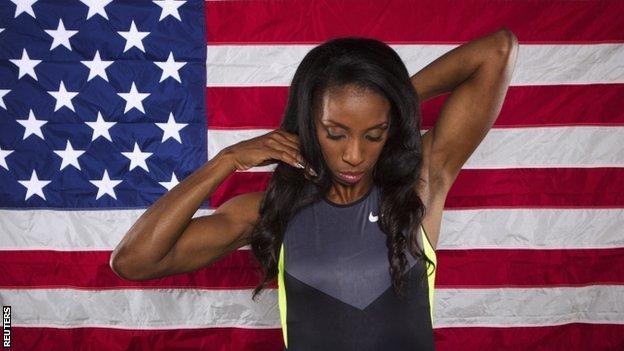 If a sporting event takes place, but ESPN SportsCenter does not see it, did the event really happen?

That is a philosophical conundrum many US Olympians find themselves pondering as they wait for their fortnight in the spotlight to come around again.

Their apparent invisibility was a topic that kept coming up at Team USA's "media summit" in Dallas this week.

Swimmer Jessica Hardy described it best when she told me "most Americans think we only race once every four years, which is frustrating given how hard we work".

But nowhere is that frustration more keenly felt that within the mighty US athletics team.

At least the swimmers can lay claim to the undisputed daddy of the US Olympic scene, Michael Phelps. And it is not as if swimming gets huge coverage anywhere else in the world, apart from Australia perhaps.

But athletics, or track and field, does get media attention elsewhere. It is also quick to remind every other sport that it is the most important, popular and purest of the Olympic disciplines.

So why is it so hard to find any athletics news in the world's athletics superpower?

The day before Allyson Felix arrived in Texas for a marathon of interviews and photo shoots, she had recorded the third fastest 100m of the season in Qatar, beating the reigning Olympic champions at 100m and 200m in the process.

Worth a story, you might have thought, particularly when you consider that Felix's compatriot Justin Gatlin - a double Olympic champion - had done the same thing in the men's race.

But when the eight-time world champion took the stage with seven other track and field stars at the Dallas summit, it seemed as if it was up to her to break the news as well.

This is probably what prompted 400m hurdles world champion Lashinda Demus to provide the most memorable soundbite of the entire gathering.

"When we get on the track we know we are taking part in a dying sport," she said to the visible alarm of every listening employee of the sport's governing body USA Track and Field (USATF).

But with the "dying sport" cat out of the bag and running free, Demus's team-mates were asked for their views on the matter when eight media "huddles" formed after the main press conference.

Wallace Spearmon, another world champion and 200m specialist, clearly did not get the urgent USATF memo because he picked up where Demus left off, explaining how whole tiers of American track and field athletes were giving up, unable to make it pay, or even get the meets.

The dust had settled somewhat, however, by the time I got a chance to put this to Sanya Richards-Ross.

"I wouldn't say it's dying but it's always been one of the smaller sports," said the new world indoor 400m champion (among other titles).

"There's definitely room for growth, though. In Europe we have a great following, and people enjoy watching us, but in the US it's only in an Olympic year that people tune in.

"Most of the time our events aren't in the papers and they're not televised, so people don't know when we're competing."

A big part of the problem, of course, is the strength of America's four big team sports, particularly the NFL. Add Nascar, MLS, golf and tennis to that mix and you have a very congested market place.

In fact, Richards-Ross is arguably better known for being married to NFL star Aaron Ross than the fact that she is the world's top-ranked female over 400m.

One possible solution to this problem would be to bring the very best of athletics right to the US viewer: a huge event, with a familiar backdrop, in a friendly time zone.

Richards-Ross admitted that when many Americans think about her sport, they are actually thinking about the Atlanta Olympics in 1996, when Michael Johnson became a global superstar.

But, in the 29-year history of the International Association of Athletics Federations (IAAF) World Championships, the US has never even bid to host the sport's premier competition.

Finland and Germany have managed to stage two each since 1983, but the US is not even in a position to think about hosting one. That is a remarkable statement for a nation that has won nearly as many world gold medals (120) as the next four countries in the all-time table put together (127).

When they say it's a dying sport, they mean that other sports have surpassed us: that's our biggest challenge

"The biggest obstacle we face to bidding for a championship is the facility - you need one that can seat at least 40,000 people and we don't have one," explained Jill Geer, USATF's head of communications.

"And every single successful bid has some form of financial assistance from local or national government: that just won't happen in the US.

"So how you solve that financial puzzle is to develop a creative partnership between the IAAF and corporate partners. That model doesn't exist right now, we have to make it.

"There is no lack of desire to have a world championship here. When you are the world's number one track and field team, you deserve a home meet."

So while the USATF tries to find a multi-use venue, a stable of big sponsors and the political will needed to make a play for a championship, the governing body is also working on the visibility issue.

"We are a much stronger sport than we were 10 or 20 years ago," continued Geer. "Athletes' incomes, participation numbers, attendances, our budgets - they're all up. What we suffer from is poor media coverage.

"Our athletes know they haven't got the same profile as basketball players and football stars.

"So when they say it's a dying sport, they mean that other sports have surpassed us: that's our biggest challenge."

Nobody can accuse the USATF of not recognising the problem, then, or not trying to do something about it. Next month's Olympic Trials will witness innovations such a performance from a major pop act, a celebrity relay race and a huge push on social media.

But what US athletics really needs is a "game-changing" star like Usain Bolt, a man who has no problem getting on SportsCenter.

The Americans had one of those not so long ago, Marion Jones, and her spectacular fall is surely a factor in the sport's retreat to the margins.

But it must be galling for today's crop of US talent that they are paying for the doping misdeeds of predecessors when baseball and gridiron seem strangely unaffected by their own drug issues.

So while they wait for the American public to forget the sins of the past - and the American media to remember when they are competing - the US team will go to London optimistic of adding to an Olympic gold medal tally that surpasses the next 10 nations put together.

Not bad for a sport on its way out.