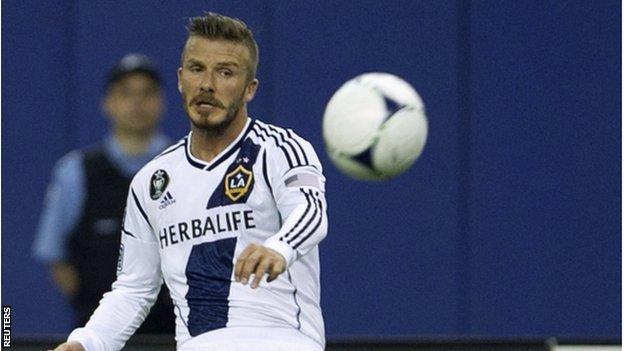 The former England captain will arrive in Athens on Thursday to play a key role in a ceremony to mark the handover of the Olympic flame to London.

"We have put no pressure on Stuart Pearce at all," said ex-athlete Coe.

"He has to pick the team he thinks can lift the trophy."

He added: "The coach is in pole position. You cannot put any pressure on him, it's entirely up to Stuart Pearce."

The torch will be flown to Cornwall on Friday for a 70-day, 8,000-mile relay around Britain culminating in the lighting of the flame in the Olympic Stadium on 27 July.

Beckham, who helped Los Angeles Galaxy win the Major League Soccer title last season, is tipped to be named as captain of the Team GB football team for London 2012.

But Coe rejected the idea that by making the 37-year-old such a high-profile figure in the build up to the Games he was making it impossible for Pearce to leave him out of his squad.

"Obviously having David around the Olympic programme is a fantastic thing but we wouldn't expect a recall for Daley Thompson or Steve Redgrave just because they are involved [in the build-up]," he said.

"It would be bizarre not to use him on a regular basis. David has been with us from the beginning.

"He was travelling independently even before Singapore. Even a few weeks ago he was with me in Los Angeles helping us with the global engagement programme. It's right he should be with us here."

Asked whether he would pick Beckham, London mayor Boris Johnson added: "Of course. But that's why I am not in charge of the football team."