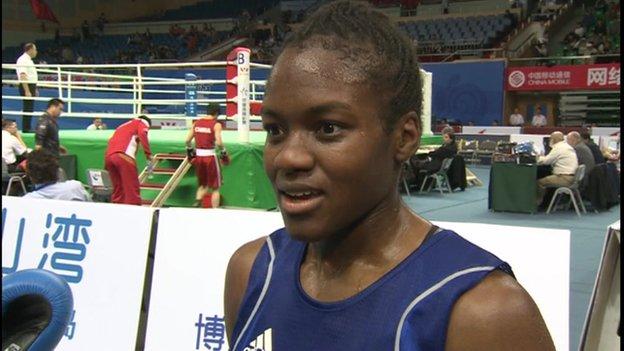 Leeds boxer Nicola Adams says she can be "one to watch" at the Olympics after securing qualification for London 2012.

The 29-year-old flyweight sealed her place in the Great Britain squad by reaching the semi-finals of the World Championships in Qinhuangdao, China.

"I think I can definitely be one of the people to watch in London. I'm starting to dream about getting that winner's medal," she told BBC Radio Leeds.

"All this year I've been beating world champions and I'm not taking my foot off the pedal now.

"It would be a massive boost for me to take the title here and having beaten a five-time world champion, I think I'm showing what I can do."

Adams, who fights Russia's Elena Savelyeva in her semi-final on Friday, is assured of at least a bronze medal in China but is hopeful of picking up the gold.

"It's going to be another tough bout, she's a world champion (as well)," she added.

"I'm ready to go and I'm confident that if I listen to my coaches I can come through and I want to go get gold now."