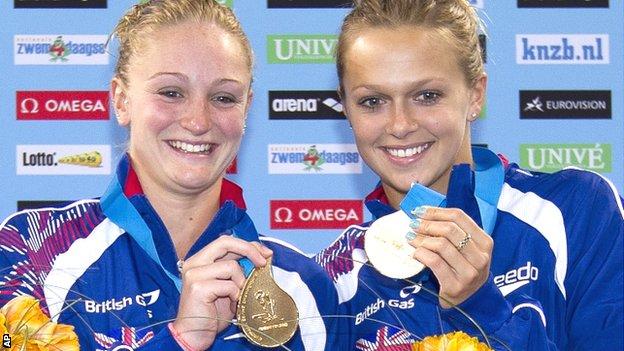 The 10m platform synchro pair rallied from behind on their final dive to beat Ukraine by 8.88 points.

Couch and Barrow lost the lead with one dive remaining, but they responded with a nerveless back two-and-a-half somersault one-and-a-half twists.

The last British woman to win European gold was Betty Slade in 1938.

Couch and Barrow are now firmly in Olympic medal contention after a dream 12 months.

They finished fourth at the 2011 World Championships and took bronze at February's World Cup - the first-ever British women's medal at a worldwide meet.

On Thursday, they established themselves as Europe's leading duo with a personal-best 319.56.

"We've done a few records now," said Couch. "It is really exciting. Tonight our aim was to win the gold and we dived really well.

"It was our personal best, which makes it even better, but even then we think we can go better.

"Today wasn't the best we can do and we scored our highest score."

The performance almost certainly inked Couch and Barrow into an Olympic place, with only a catastrophic display at June's trials in Sheffield likely to deny them.

"We hope to be in London, we've been doing well, but we've got trials in two weeks' time so it is not long to wait now," said Barrow.

"We're in good shape physically and the results are showing. It's amazing to break that 74-year record as well.

"We just have to keep working hard."