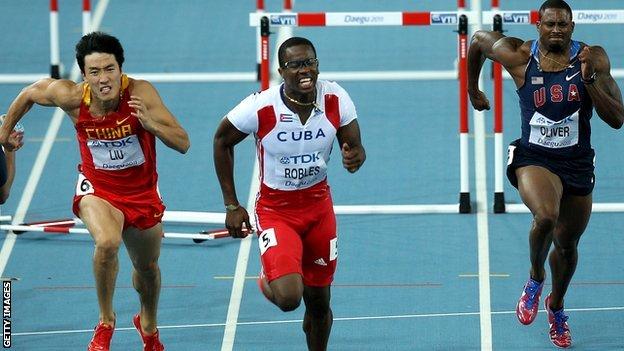 The 80,000 fans lucky enough to be in London's Olympic Stadium on 8 August could be in for a treat.

Barring injuries, the three fastest sprint hurdlers in history are likely to go head-to-head for the first time in an Olympic 110m hurdles final.

Between them they hold the Olympic title, the world record and more entries on the top 10 all-time list than any other competitors.

"A good solid technique is paramount and coupling that with great foot speed makes for the greatest hurdler. Each of these athletes have all of these attributes, hence the closeness of their personal-best times. Anything can go wrong in a hurdles race but you train for extremities like hitting hurdles or tripping. During training sessions you have to deal with all those issues. My money is on Liu Xiang to win in London because, out of all of them, he has the most consistent technique and makes the least mistakes."

But Dayron Robles, David Oliver and Liu Xiang, the only three men to have ever run under the 12.9 second barrier, are yet to race each other in the final of the greatest sporting contest of them all.

A word of warning London 2012 organisers - when the three came together in the World Championships final last August, all hell broke loose.

Cuban Robles crossed the line first but was later disqualified for nudging Liu during the race, who was thus promoted to a silver medal. The title was then handed to the lesser-known American Jason Richardson. Fellow countryman Oliver was off the pace in fourth.

"I always describe the incident as a very beautiful accident," Liu said via a translator. "It's a competitive sport where everything and anything can happen."

The stage had been set for their Olympic showdown in China four years ago, but Liu, in front of an adoring home crowd in Beijing's Bird Nest, did not even make it through the heats.

As an injured and inconsolable Liu limped off the track, Robles went on to win Cuba's only Olympic athletics gold that year, while Oliver took bronze.

Since 2004, when Liu etched his name into the history books as China's first male track-and-field champion, the three of them have dominated the sport.

Liu has bagged medals at four of the last five World Championships he has competed in, including the title in 2007, while Robles - who has held the world record since 2008 - has seven of the top-10 fastest 110m hurdles times ever run.

Is this the greatest era of sprint hurdling ever?

"We're the fastest three of all time but we have to wait until our careers are over to determine whether we are the best of all time," Robles told BBC Sport via a translator.

"My physical condition is probably my number one asset. The second thing is my mind, because I constantly will myself to win. I am my own main rival. When I'm in good form there are chances that rivals will worry more about you me than I worry about them.

"I'm looking to get in the best possible shape for London and not worrying about my rivals," the 25-year-old added.

He might or might not know that Liu recently ran his fastest time in five years at a Diamond League event in Shanghai, comfortably beating both Oliver and Richardson in 12.97s.

For 28-year-old Liu and 30-year-old Oliver, London 2012 could hold added significance as it is likely to be their last Olympics. Robles too has hinted at "retiring right then and there" after retaining his Olympic title in London.

Visa issues have prevented Robles competing at the Diamond League meet in Oregon on Saturday, meaning it could all come down to their Olympic showdown in London.