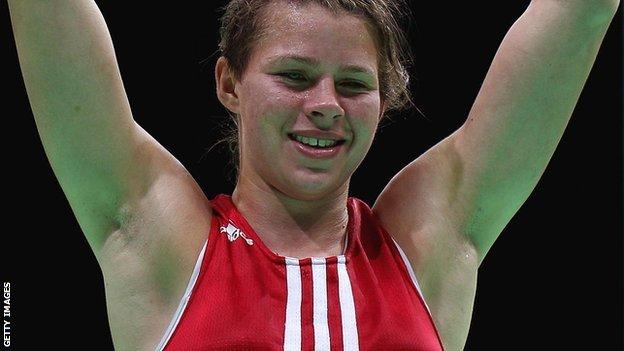 Great Britain's boxing squad will have representatives in all three women's weight categories at the London Olympics after Savannah Marshall claimed the final place in the squad.

Marshall beat Russia's Nadezda Torlopova 11-9 to reach the final of the World Championship in China.

"I am incredibly relieved to have finally qualified," she said.

"It's what I have been working towards for the last three years and to know I have achieved it is amazing.

Marshall will box for gold against Azerbaijan's Elena Vysropova, and she is in confident mood.

"Now I can go into Saturday's final feeling incredibly relaxed and knowing I have the opportunity to become world champion."

Leeds fighter Adams secured her place in the final after a dominant 11-6 win against another Russian, Elena Savelyeva.

"I've taken out two world champions now so why not a third? This is definitely the most confident I've been in my career.

"I think it's down to all the coaching and hard work that I've put in, it's all paying off."

Asked about her prospects against arch rival and home favourite Ren Cancan, Adams said: "She's tricky, she's a good opponent. It's going to be a game of chess but I'm looking forward to it."

Meanwhile, Liverpudlian lightweight Jonas - who was the first Briton to secure her Olympic place - had to settle for a bronze medal after losing in her semi-final to Russia's Sofya Ochigava.

Women's boxing will feature at the Olympics for the first time at London 2012.