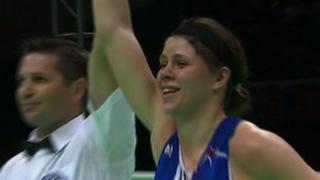 The 21-year-old celebrates her birthday by beating Azebaijan's Elena Vystropova in the final in Qinhuangdao.

The Hartlepool fighter, who had already qualified for the British Olympic team by winning her semi-final, secures a 17-15 victory.