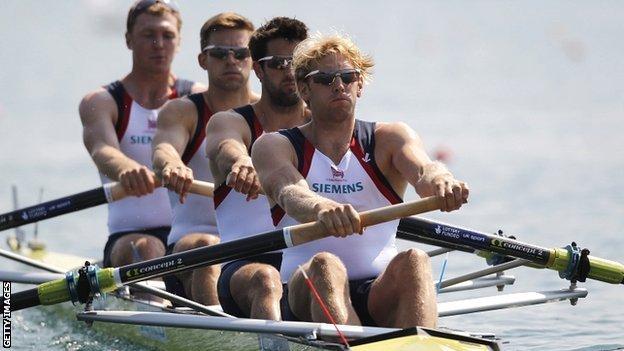 Great Britain's men's four made a powerful statement on day one of the World Cup event in Lucerne by setting a world-best time in qualifying.

The GB four won the opening World Cup in Belgrade but face tougher opposition in Lucerne, with Australia also qualifying well on their 2012 debut.

"We didn't set out to get the world record," James told GB Rowing.

"We set out to win our heat and we didn't want to hide away from hard work, even in a heat, if it gave us speed.

"The world-best time is nice but we're here to beat people and to put in that kind of performance consistently."

Lucerne is the last competition before GB's Olympic rowing squad is named on 6 June, and fast conditions led to a number of record marks being set on Friday.

As well Britain's four, there were world bests for Canada, Russia, the United States, New Zealand and Germany.

Many of the world's strongest crews, including those from New Zealand, Australia and the USA, are making their season's debuts in Switzerland after skipping Belgrade earlier this month, where Britain won four golds.

The GB men's four beat the former leading time by four seconds, but it is referred to as a 'world best' rather than a 'world record' because times are so dependent on conditions

Leading London hopes Katherine Grainger and Anna Watkins won their heat in the women's double scull, while Zac Purchase and Mark Hunter made it through in second place in the lightweight men's double.

"It was a really enjoyable race," said Watkins. "We felt really in control and it's great to have strong opposition to race."

Helen Glover and Heather Stanning followed up their victory in Belgrade by winning their heat of the women's pair by clear water to qualify for Saturday's semi-finals, and there were wins for the men's single and two lightweight single scullers.

The second women's pair and both men's pairs also qualified, but the men's eight face a repechage after they could only finish third in their heat behind a world best from Canada and Poland in second.

Another world best saw world and Olympic champions the USA win their women's eight heat, while Britain - including Olympic quad silver medallists Debbie Flood and Annabel Vernon for the first time - were second and must hope to make it through the repechage.

"We've seen the high standard here that we expected and we have had a strong morning but not everything has gone our way," said GB Rowing performance director David Tanner.

"There is plenty to play for in tomorrow's semis."