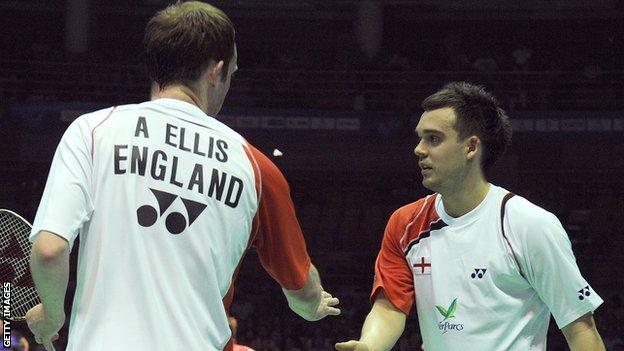 Chris Langridge and Nathan Robertson lost in the doubles and Carl Baxter and Ben Beckman lost their singles rubbers.

Head coach Kenneth Jonassen said: "We're not hiding from the fact we lost but we did our best and I'm proud."

Having lost their first match of badminton's men's team world championship 5-0 to China on day one, Team England needed to beat their other Group A opponents Indonesia to avoid an early exit in Wuhan.

However, they found themselves one down after the opening singles, English national champion Rajiv Ouseph beaten by world number nine Simon Santoso.

Adcock and Ellis, who are on the reserve list for the Olympics, levelled things but it was not enough.

Jonassen added: "We went into this match determined to ask Indonesia some tough questions. We were determined to make them play their very best to beat us and I think we did that."