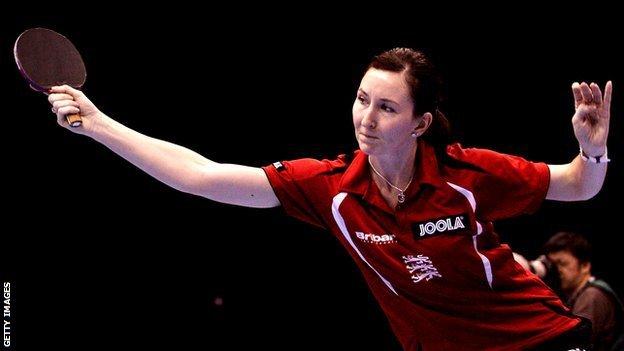 Liam Pitchford, who beat world number nine Vladimir Samsonov in October, has been included in Team GB's six-strong squad for the London Olympics.

The squad now travel to China for a month of Olympics preparation.

They will be hoping for a strong showing at the China Open which starts on Wednesday.

Two British teams of three will compete in the men's and women's sides of the draw at London 2012.

The squad were only awarded one wildcard single's place per gender having failed to qualify by right at the European Olympic Qualification Tournament in Luxembourg in April.

The six chosen means there is no place for Darius Knight, the 22-year-old who moved to Austria in October in search of better funding and facilities.

Four-time national champion Drinkhall said of his selection: "It's a once-in-a-lifetime opportunity to play in a home Games.

"I can only guess how it will feel but it's a fantastic opportunity nonetheless."

Parker told BBC Surrey: "It's an amazing feeling. I was pleased with the selection because it was pretty tight between us.

"There's no secret the table tennis is a really tough competition dominated by the Asian nations.

"Medal-wise, it's difficult. Realistically, we're just hoping to do the best we can and try and take our chance when we get it."

Team leader Jill Parker MBE said: "This will be the first time that we have competed in both the men's and women's team event.

"Our athletes have prepared incredibly thoroughly for this chance of a lifetime.

"With home advantage, our athletes are confident they will rise to the occasion."