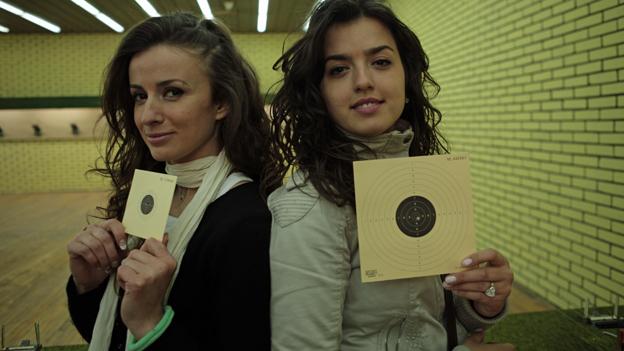 One after another, pellets ping into a bullseye smaller than the head of a pin.

The scores are impressive, Olympic class even, but that is no consolation for the shooters Lumturie and Urata Rama.

The cousins are at the top of their sport but they won't be in London this summer because the International Olympic Committee (IOC) does not formally recognise their homeland of Kosovo.

At its final meeting before London 2012, the IOC will decide on Thursday whether to let Kosovo's flag fly at the Games.

Kosovo spent many years fighting with Serbia before declaring independence in 2008 and Lumturie Rama is well aware of the irony that her sport - pistol shooting - is closely related to Kosovo's recent struggles.

"Our country should not be seen as a conflict zone as others might remember us before 1999," she says.

"We have normal lives here also. We have normal activities as all other people. There are good sportsmen here who really love sports and would like to be represented abroad also."

To date, Kosovo has failed to become a member of the United Nations. As a result the IOC and many sporting federations refuse to admit competitors from the Balkan state. It is a situation that frustrates 25-year-old air rifle specialist Urata Rama.

"Shooters have to be very calm people," she says.

"I always worry and ask myself 'why can't I be treated like other sportsmen since I have the same results as other shooters?'"

Their coach is Ali Pllana, a four-time shooting champion of Yugoslavia, whose own Olympic dreams were crushed by politics.

He tells us that his father was killed for not joining the Communist Party, and with that in mind, Pllana also refused to join the Party. The Yugoslavian Olympic Committee barred him from its Olympic squads as punishment.

"I feel personally frustrated by the situation," Pllana says.

"The frustration is even greater when we have applied three times to be a member of the ISSF [International Shooting Sport Federation]. I know rejection is based on political decisions rather than shooting status".

Entering Kosovo, a text message politely welcomes the visitor to Monaco. The reason - Kosovo does not have its own international dialling code and therefore relies on Monaco for its telephony services.

This isolation frustrates many but in Peja, a town the Serbs call Pec, a young judo fighter offers some hope.

Twenty-one-year-old Majlinda Kelmendi is one of the very few Kosovans that can compete abroad. In April, the International Judo Federation became only the fifth world governing body in sport to recognise Kosovo.

Majlinda wants nothing more than to win an Olympic medal for her country.

They see me like a hero and I really don't want to disappoint them. I hope that I will be successful, I will give my best, I'm excited, I'm proud and it's my honour.

She is the only athlete from Kosovo to have qualified for London 2012 and although she enjoys the support of the whole country, she feels that expectation weighs heavy upon her.

"I'm the only one from my country who can go to the Olympics and of course it's a little bit of pressure," she admits.

"They see me like a hero and I really don't want to disappoint them. I hope that I will be successful, I will give my best, I'm excited, I'm proud and it's my honour."

Majlinda is set for London but there is the small matter of how she will compete given she may not have a country to represent.

A spokesman from the IOC states that, according to the Olympic Charter, Kosovo must be an "independent State recognised by the international community" if it wants to participate in the Games. Kosovo has some 90 countries in support of its bid for nationhood but is that enough?

If Majlinda cannot represent Kosovo at the London Games, she does have other options. As she holds an Albanian passport, she has competed for them in the past.

She has also been offered money to represent Azerbaijan - something she has turned down - and she could compete as an Independent Olympic Athlete (IOA).

In Sydney in 2000, four athletes from East Timor took part as IOAs.

And in Barcelona in 1992, Yugoslavia, which was the subject of United Nations sanctions because of its military aggression against Croatia and Bosnia-Hercegovina, was banned from taking part in any team sports, but individual Yugoslav athletes were allowed to compete.

Heading towards another intensive training regime in the beautiful Rugova Mountains, Majlinda is pragmatic about the effect of politics on her sporting career.

"For me, it's the same if I go as an independent athlete - because if I do, then everyone will ask - who is she? And then people will know that I am from Kosovo."

And she probably won't be alone in that. Participants from South Sudan, newly separated from the rest of Sudan, may have to compete at the 2012 Games as independents.

As will competitors from what used to be called the Netherlands Antilles, dissolved last year into the autonomous territories of Curacao and Sint-Maarten - neither of which is eligible for inclusion by the IOC.

For Memli Krasniqi, Kosovo's sports minister and a former rap star, the IOC's meeting on Thursday is of the utmost significance.

"Kosovo needs to have equal opportunities for our many young athletes, who have for a very long time been denied the opportunity to showcase their talents and to compete with their peers from around the world," he says.

"Membership of a Kosovo NOC in the IOC would open this door of opportunities for our young athletes. It would mean that we are equal with others."

Either way, Majlinda keeps her focus on the judo. As her country fights for recognition, she fights for gold.