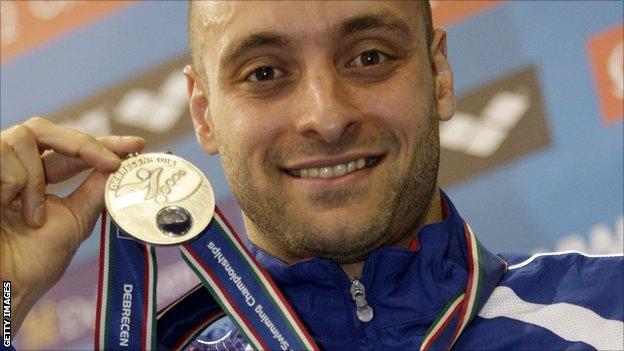 James Goddard believes he will need to swim the perfect race in order to win an Olympic medal at London 2012.

Goddard, who won a European silver in the 200m individual medley in Debrecen on Wednesday, will be competing against Michael Phelps and Ryan Lochte.

"I'm not trying to focus on beating Michael Phelps," he told BBC Radio Manchester. "I've got a race plan in my mind of what splits I need to do.

"If I perfect it, I'm hoping that I'll come away with a medal."

The Stockport Metro swimmer, 29, has opted to compete only in the 200m medley in London, rather than combining that event with the 200m backstroke, as he did at Beijing in 2008.

Goddard won Commonwealth gold in his home city of Manchester in 2002 and he believes home advantage will be a huge benefit to the British swimmers later this summer.

"It's great going to all these amazing countries but it's special when it's at home," he added. "There's not one British athlete who will wish it to be anywhere else but London.

"It's the perfect scenario for us Brits and it's not for the other countries.

"The likes of Australia have got to travel a long way and try and do it on our turf. It gives us a massive advantage."

Ian Cheeseman's full interview with James Goddard, broadcast on BBC Radio Manchester's In The Spotlight programme, is available to listen again on the BBC iPlayer