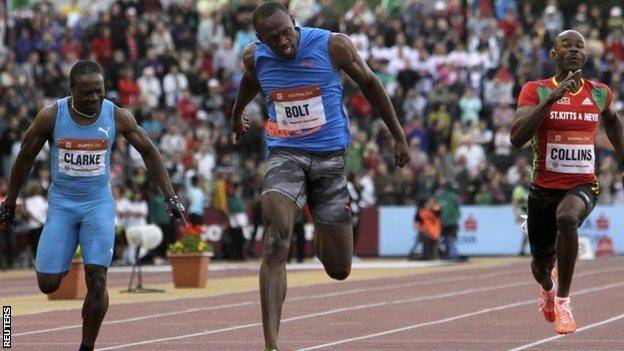 Usain Bolt was sluggish in winning the 100m in 10.04 seconds as Dwain Chambers finished fifth in the Golden Spike meeting in the Czech Republic.

Just two months before the Olympics, the Jamaican world record holder looked far from his best in Ostrava.

Britain's Chambers clocked a season's best time of 10.28 but remains short of the London 2012 qualifying time.

Chambers was given the right to compete at the Games when a British Olympic Association by-law that banned drug cheats from competing at Olympics was overturned.

Like him, Mark Lewis-Francis missed out on the Olympic qualification time of 10.18 despite winning the 'B' race.

However, Chambers, who was competing in his first major meeting in six years, could at least reflect on a significant improvement from the 10.52 recently recorded in Puerto Rico - his second slowest time in 15 years.

He said: "More than anything I'm pleased with the way I felt during the run. I felt really good to 80 metres and just need to work on that part now, the last 20 metres of the race. The only way that happens is with more competition at this level.

"I'm really pleased with what I've done this evening and it's good to be racing against the big guy."

"I don't really know what went on," he said. "At the start, I didn't feel as explosive as I normally feel. If you don't get that first start, well that's where my power comes from for the transition and everything comes together.

"That's reality, a very bad day at the starting blocks. I was looking forward to coming here and doing a good time.

"When I was in the back warming up, I did some starts and I was flying. I ran out and didn't get going, couldn't generate speed up in middle of race so I had to work hard to get some speed up.

"I'll go back, look at the replay, talk to my coach and he can explain what I need to do and then I can go to Rome and improve on my time."

Meanwhile, Christine Ohuruogu met the A standard in the women's 400m as she finished second behind the United States' Sanya Richards-Ross.

Tiffany Porter, recently GB's captain at the World Indoors in Turkey, won the 100m hurdles in 12.65, while fellow Brit Perri-Shakes Drayton met the B standard in finishing third in the 400m hurdles.

South Africa's Paralympian Oscar Pistorius finished over two seconds behind defending Olympic champion LaShawn Merrit of the US in the men's 400m in a time of 47.66, while Britain's Andrew Osagie impressed in the 800m, finishing second to Poland's Adam Kszczot.

British trio Andy Pozzi, Lawrence Clarke and Andy Turner finished fourth, fifth and sixth respectively in the 110m hurdles, which was won by Dexter Faulk of the US - Clarke setting a personal best of 13.42 and Turner a season's best of 13.48. Pozzi's 13.36 was his second fastest time to date.