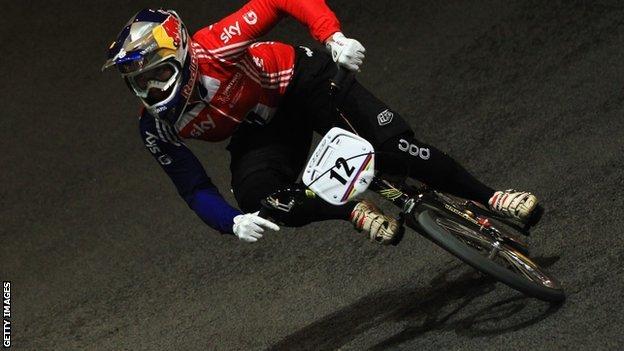 Both led until they were deposed by the final rider, with Australia's Caroline Buchanan and Connor Fields of the United States taking the golds.

Phillips stopped the clock in 26.178 seconds in Birmingham, while Reade managed 29.401 despite a crash which hospitalised her only a week ago.

"A gold medal would've been great but to get silver was fantastic," she said.

Reade, who won gold in Copenhagen in 2011, was left with severe concussion following a crash at the BMX track in Manchester last weekend, causing her to miss three days' training in London, which represented the last chance to ride the Olympic track before August's competition.

"I took a pretty heavy slam - not the best preparation leading into a worlds," said Reade, who had qualified only ninth fastest at the National Indoor Arena on the opening day of elite competition.

"I missed the Olympic training due to injury and just had to rest up. Sometimes the goalposts move and you've got to move with them. I gave it my absolute best and that was a silver."

Phillips, from Burnham-on-Sea in Somerset, qualified sixth fastest but was pipped by fastest qualifier Fields, who clocked 25.806.

"This was a race that I've been looking forward to for some time," he said. "The Olympics is top of the order, but you can't overlook a World Championships in your back yard.

"I can take a lot of confidence, but at the same time I'm looking this to build going forward to Saturday."

Reade is joined in Saturday's women's super cross, where she is bidding for a fourth world title, by Abbie Taylor, who qualified in 21st place today. Tre Whyte and Grant Hill will join Phillips in the men's event.