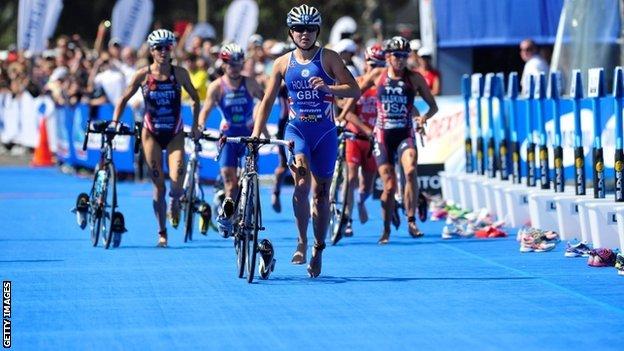 Vicky Holland and Liz Blatchford face an anxious wait to find out if they have done enough to make the British team for the London 2012 Olympics.

Holland finished seventh in Madrid with Blatchford close behind in 10th in the ITU World Triathlon Series race.

World champion Helen Jenkins, who chose to miss this race, is already assured of a place, leaving two further spots.

Vanessa Raw came 21st, while Kerry Lang and Abbie Thorrington both failed to finish in the event, which was the final race to count towards qualification for this summer's Olympics.

The British Olympic team will be announced on 8 June.

Holland said: "It's a hard course but most of the time I was pretty comfortable. I couldn't give any more than that. I've dreamed of going to the Olympics for 20 years, I just hope that I have done enough.

"I put it all on the line. Finally things are starting to click into place. Whoever makes the team, best of luck to them. We've got such a strong team."

Blatchford, who suffered with stomach cramps while on the bike, said: "To finish 10th isn't bad, but I would rather it had been a less eventful race."

Pre-race favourite Jonny Brownlee will lead British hopes in Sunday's men's event following his recent victory in San Diego, though brother Alistair misses out as he continues his recovery from an Achilles injury.

There is one place still up for grabs in the British men's team.