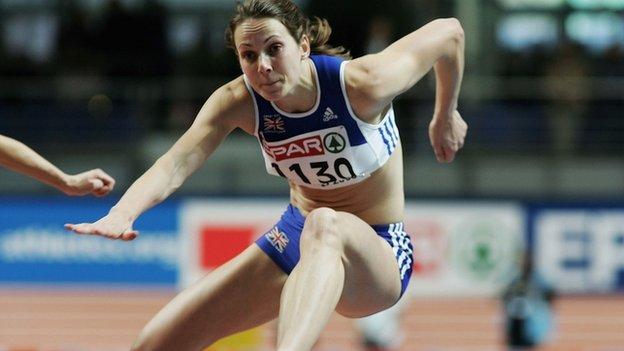 Kelly Sotherton has announced her retirement after failing to recover from a back problem in time to qualify for the heptathlon at London 2012.

The 2004 Athens bronze medallist recently had an operation to remove a piece of disc and medics told her she could be running within six weeks.

But that means the 35-year-old misses the GB Olympics selection deadline.

"I was always retiring this year but it is disappointing it is just before the Olympics," Sotherton told BBC Sport.

Sotherton, who also won Commonwealth gold in the heptathlon at Melbourne in 2006 and bronze at the World Championships in Osaka a year later, returned to the event last year after quitting it in favour of the 400m in 2010.

She was competing at the IAAF Combined Events Challenge in Italy earlier this month when she broke down in the 200m and said she knew immediately the injury was serious enough to end her dream of competing in London.

"I've had an injury-plagued back for eight years and had prolapsed discs in 2010 and it was a 50-50 risk going into this year," Sotherton explained.

"I didn't know if I was going to make the Olympics and I was halfway through a heptathlon three weeks ago and my prolapsed disc got worse, hit a nerve, I could hardly walk and my leg was terrible. It was horrendously painful.

"A couple of days later I had surgery on my back and that called time on my career.

"It was quite hard and I'm quite pleased I did it in my mind a few weeks ago. It only came out in the last couple of days so I've grieved for it a little bit."

Sotherton says she will now be supporting former rival Jessica Ennis and has backed her to claim gold for Great Britain in the heptathlon at London 2012.

"I think the hardest part is going to be watching the Games," added Sotherton. "I don't think it would be so bad if they were in another country but because they are at home and it is 24/7, it is on the telly all the time and you see the torch relay, it is really hard.

"Once the Olympics are over I think it will be fine. I need to learn to enjoy watching it and supporting everyone too."