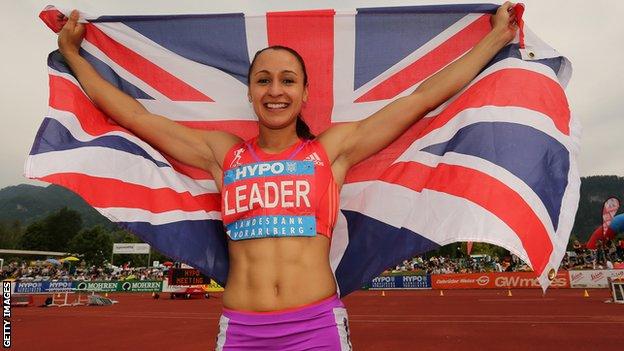 Jessica Ennis set a new British heptathlon record as she won the Hypo event in Austria with 6,906 points.

Her score beat the old British best of 6,831, set by former Olympic champion Denise Lewis in 2000.

Russia's Tatyana Chernova, who last year took the world title previously held by Ennis, was 132 points behind in second, with Lyudmyla Yosypenko third.

"I think she will [get gold at the Olympics], it's going to be tricky but I think she's got every attribute to win gold. She looks like she's coming good at just the right time, she got a personal best at the weekend and beat Denise Lewis's British record. She's such a strong personality and having that home crowd is only going to help her. She is bigger, but she's not fat. She's strong, she's a much stronger looking athlete and I bet, come the Olympics, she will look amazing. I do think it's a bit uncalled-for, the 'fat' jibes."

"I knew I was capable of doing it. It was just a case of putting it together on the day," said Ennis.

"It's something that's been at the back of my mind and I wanted to achieve, but I didn't want to put too much pressure on it."

It was Ennis's third successive win at the Gotzis event, her last heptathlon before the London Olympics.

The 26-year-old from Sheffield had led by more than 200 points after a first day in which she set a new personal best of 22.88secs in the 200m and produced strong performances in the shot and 100m hurdles.

She finished the first day with a score of 4,113 points, 33 better than her overnight total at the 2010 European Championships in Barcelona, when she set her previous best of 6,823 points.

Her second-day performance had cost her the world title in Daegu last year, but in Gotzis she began by equalling her personal best of 6.51m in the long jump.

She then threw a new personal best of 47.11m in the javelin, improving her previous mark by 40cm.

"I brought the long jump back and proved my javelin's in a better state. I'm over the moon," added Ennis.

Her efforts left her needing to complete the final event, the 800m, in two minutes and 14 seconds in order to beat Lewis's mark.

She led from the gun and, despite being passed by Chernova just short of the line, finished in 2mins 9secs to set the new mark and gain a psychological edge over her leading rivals in the run-up to the Olympics.

Ennis said she believes losing at the World Championships helped her refocus on the heptathlon.

"I've learned from those times," she commented. "I learned what I need to do in the long jump, what I needed to do in the javelin and I've been able to rectify those events. It's been a bit of a learning curve, which is good."