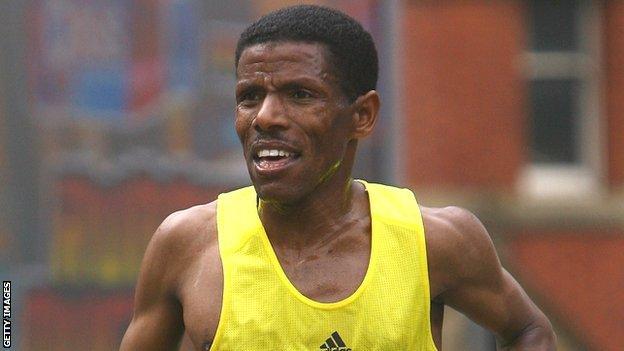 Ethiopian two-time Olympic 10,000m champion Haile Gebrselassie has failed to qualify for this summer's Games in London after finishing seventh at the Fanny Blankers-Koen Games in Hengelo.

With the race being an official Ethiopian Olympic trial, Gebrselassie needed a top-two finish to qualify.

But the 39-year-old ran a time of 27 minutes 20.39 seconds, nearly nine seconds behind winner Tariku Bekele.

Elsewhere, Britain's Phillips Idowu was victorious in the triple jump.

Former world-record holder Gebrselassie, who has already failed to earn a spot in the marathon for London this summer, was hoping to compete in his fifth Olympics and was in confident mood after winning the Great Manchester Run last weekend.

However, his chances of appearing are now over following a race won by Bekele in 27mins 11.70secs, just ahead of Leleisa Desisa Benti who will join him in London.

The third spot in the Ethiopian team is being held open for world-record holder Kenenisa Bekele, Tariku's brother, who has been suffering from injury problems.

"The Games in London is over for me," said Gebrselassie. "I ran a good race until the last lap. I felt good but I manifestly didn't have the speed to compete against my rivals. That's life. I am not disappointed."

Also in the Netherlands, in the 400m, Santos Luguelin of the Dominican Republic posted the second-fastest time of the year, 44.45secs, to edge out Britain's Martyn Rooney.