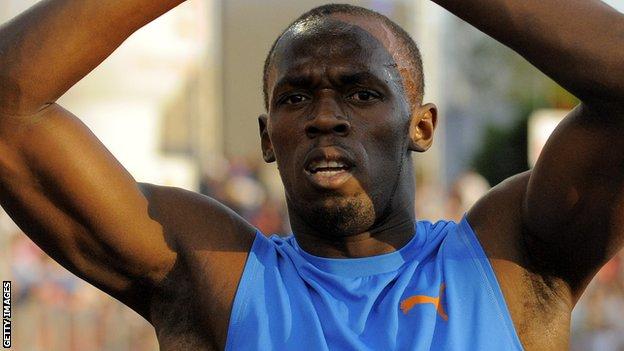 ATHLETICS - Diamond League, Rome (31 May); Usain Bolt hopes to improve on his below-par time of 10.04 seconds in Ostrava last week, which was still good enough to clinch victory. Jamaican team-mate Asafa Powell will give him a stern test. World 400m hurdles champion Dai Greene is among the GB athletes in action. Live coverage on BBC3 and BBC Radio 5 Live.

TENNIS - French Open (27 May - 10 June); the second major of the year sees Rafael Nadal bidding for a record seventh title at Roland Garros. Britain's Andy Murray begins his campaign against Japan's Tatsuma Ito on Tuesday, while wins are more vital than ever for some with the world rankings cut-off for Olympic places to come on 11 June. Live coverage on the BBC Sport website.

HOCKEY - Sultan Azlan Shah Cup, Malaysia (24 May - 3 June); Great Britain's men are one of seven teams playing in this tournament. They began with a 3-3 draw against hosts Malaysia, then beat India before losing 3-2 against Argentina. Jason Lee's side face in-form New Zealand on Wednesday and finish with a match against Pakistan on Sunday, a dress rehearsal for their Olympic group game on 3 August. Follow Great Britain Hockey on Twitter.

GYMNASTICS - TRAMPOLINE - North West Gala, Liverpool (2 June); the final selection trial for Team GB, with Kat Driscoll and Laura Gallagher among those competing for one place in the women's individual event at London 2012.

Britain's title came as a strong Russian squad, hosts France and Germany all made costly errors.

Kristian Thomas, by contrast, held his nerve for a superb last routine on the high bar to win the gold for Britain.

On the final day Louis Smith won a silver medal on the pommel horse.

Jessica Ennis set a new British heptathlon record as she won the Hypo event in Austria with 6,906 points.

Her score beat the old British best of 6,831, set by former Olympic champion Denise Lewis in 2000.

Russia's Tatyana Chernova, who last year took the world title previously held by Ennis, was 132 points behind in second, with Lyudmyla Yosypenko third.

It was Ennis's third successive win at the Gotzis event, her last heptathlon before the London Olympics.

The 22-year-old, who was victorious in San Diego a fortnight ago, put in a highly impressive display on the bike before going on to secure victory.

He finished ahead of the Russian pair, Alexander Bryukhankov and Dmitry Polyansky.

But there was disappointment for Tim Don. Needing a podium finish to clinch Team GB's final Olympic triathlon spot, he dropped out of the run.

The women's pair, women's lightweight double and men's four all won, with GB also taking silver in the men's eight and bronze in the lightweight four.

But there was disappointment for Olympic lightweight double scull champions Mark Hunter and Zac Purchase who could only finish sixth in their final.

Olympic champion Tim Brabants is set to defend his K1 1000m title in London after winning his race-off with fellow Briton Paul Wycherley.

Brabants took the best-of-three series 2-1 by making the final of the World Cup event in Duisburg, while Wycherley went out in the semi-finals.

Officials must ratify the decision this week before selection is confirmed.

Ed McKeever was once again the star for Great Britain, winning gold in the K1 200m and helping GB win the relay.

British rider Liam Phillips's Olympic dream hangs in the balance after he broke his collarbone at the BMX World Championships in Birmingham.

Phillips, 23, was taken to hospital after tumbling over his handlebars, while Shanaze Reade also crashed out but escaped with grazing.

Broken collarbones can take up to 12 weeks to heal, while the Olympic BMX event starts on 8 August.

Both Phillips and Reade had claimed silver medals in the time-trial in Friday's opening day of elite competition.

I first heard of the decision not to select me on 11 May. I could not believe what I read

Aaron Cook has launched an appeal after being left out of the Great Britain taekwondo squad for London 2012.

Cook, 21, had been expected to secure the under-80kg nomination in a four-strong team, having retained his European title in Manchester at the start of May.

But he was overlooked in favour of Lutalo Muhammad, who would have to drop down a weight division for the Olympics.

Cook quit the GB programme a year ago following a first-round defeat at the World Championships in South Korea, and has recruited his own coaches and support staff.

Faulds, 35, has been selected for his fifth consecutive Olympics, having claimed double trap gold at the 2000 Games in Sydney.

You can view the full British team here.

Fell is now expected to achieve the Olympic qualifying standard via her world ranking, leaving Pentathlon GB to decide between four eligible athletes for the two women's places available. The Olympic team will be announced on 8 June.

In the men's event, Britain's Nick Woodbridge and Sam Weale finished fifth and seventh respectively to confirm their eligibility for the Olympics by virtue of their world ranking. Jamie Cooke, Britain's reigning world junior champion, has also qualified, meaning one of them will miss out.

British archer Naomi Folkard has won silver at the European Championship in Amsterdam.

It is a third European silver medal for Folkard, who was beaten in the final by Russia's Ksenia Perova, who had knocked out Alison Williamson in the quarter-finals.

Great Britain's men missed out on a medal when they were beaten by Ukraine in the bronze-medal match.