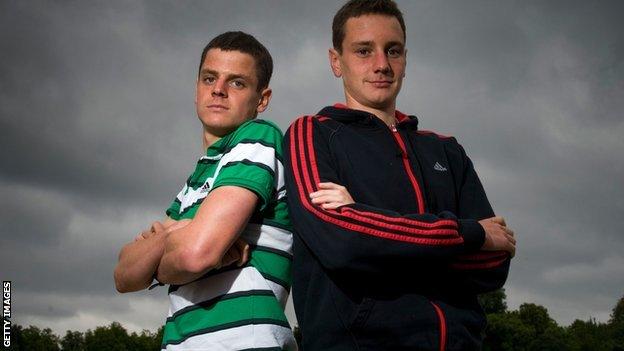 Alistair Brownlee's father Keith tells a revealing story about his son's first ever duathlon, aged eight, on the streets of east Leeds.

"His shoe came off by accident 100 metres into the run. There was glass and gravel all over the road, and we were shouting at him to stop. He refused to listen, and just carried on regardless all the way to the end. He ripped his feet to pieces."

Not many eight-year-olds would run over broken glass. But then again, not many grow up to become world champions. Even fewer have a younger brother who turns out to be equally as good.

There is very little that is average about Alistair and Jonny Brownlee. The top two triathletes in the world by some distance, they will go into the London Olympics, injury permitting, with a very real chance of winning gold and silver.

If they do, their grandfather Norman will know who deserves the initial credit: himself.

"He tells us that he is responsible for our sporting genes," says Jonny. "When he was in the merchant navy during the war his ship was sunk, but he managed to swim all the way to shore. That's the basis for his claim."

"Every time he sees me," agrees Alistair, "he says, 'You really remind me of someone. Yeah, you remind me of me, actually.'"

Norman notwithstanding, the real roots of the brothers' successes lie in the landscape of their native west Yorkshire.

Brought up by their parents to enjoy the great outdoors, they had a childhood that involved running up fells and through woods, riding through the Dales and swimming in lakes. If it sounds idyllic, it was also near-perfect preparation for the sport they would come to dominate.

Taken to swimming lessons by mother Cathy from the age of four, they would cycle the seven miles to secondary school and then, thanks to the unusually benevolent attitude of their teachers at Bradford Grammar, be allowed out of the school grounds at lunchtime to go running.

With the exception of Jonny's early dislike of swimming lessons (he used to hide his kit-bag to get out of them) it was always all about fun, rather than training.

"We would just be going cycling with our mates at weekends for a laugh," remembers Alistair, the elder by almost exactly two years. "We were going up to the Dales on camping trips, just having fun, messing around, finding new cafes, discovering new places."

Alistair's early successes in triathlon - he was competing in the European Youth Relays aged 14, by his own admission the smallest one there - dragged Jonny away from dreams of playing for Leeds United and into the same career progression.

"I remember seeing all Al's Great Britain kit - the tri suits, the t-shirts, the bike jersey, and thinking, 'Wow, I want to be part of that,'" he says.

This season, with Alistair not expected to return to racing from his Achilles tear until the World Triathlon Series race in Kitzbuhel next month, the spoils have been Jonny's alone.

Wins in San Diego and Madrid in the last three weeks have kept the Brownlee name at the top of the world rankings. They have also changed the way their rivals now approach races.

"It used to be that you could do what you wanted on the bike leg," says Jonny. "Now we're the watched ones. If someone makes a break, everyone waits to see how we're going to react. We're the ones who have to do all the attacking."

For Alistair the change happened after the last Olympics in Beijing, when as a callow 20-year-old he led for much of the race before slipping out of the medals as heat and exhaustion began to tell.

"The following race was in Des Moines in Iowa. I tried to get off the front on the bike, got caught and couldn't understand why I'd been chased down. One of the guys next to me shrugged and said, 'Because we know who you are now'."

With London closing in fast that process has accelerated.

"The number of times we're recognised in cafes, or when you're out on long rides, has gone through the roof since Christmas," says Alistair. "I'd never previously been recognised by anyone who wasn't really into triathlon.

"As I've come back from the injury I've had people shouting, 'Good to see you running!' when I've been out. Everywhere I go I'm constantly asked how my Achilles is."

He grins. "I'm not pretending we're movie stars quite yet . I'm sure a lot of the attention was because we're on the front of all Yorkshire phone-books this year.

"'That's those phone-book lads,' you hear people shout. People tap us on the elbow and say, 'Could you sign me phone-book please?'"

Despite their similarities in sport and success, the two are distinctly different characters.

Al is innately self-confident, seldom a worrier, liable to turn up for big races or training sessions with mere seconds to spare. Jonny, by contrast, admits to stress before races, to a need to feel in control, to a love of routine and organisation.

When training requires an early alarm call it is Jonny who is up first to pack bags and make the breakfast, Al the one squeezing every last minute out of his time in bed.

"The thing that normally wakes me up is the sound of Jonny's tea-spoon - and it is always a tea-spoon - clattering away inside a bowl," says Alistair.

"If there was one other event he could be a world-beater at, it would be speed-eating cereal. It's amazing how many Coco-Pops he can get on a spoon."

Where they share an attitude is towards pushing themselves brutally hard in both training and races. And if this increases the risk of injury, rather that than never knowing just how good they might have been.

"I could train a bit less, and I'd get less injured, but I wouldn't be as good," says Alistair, with characteristic logic. "Or I could train as much as I do, take the risk of being injured and be good.

"This isn't a job for us, or a hobby. It's our passion. It's always been about how good I can be, how much training can I do, how fast does that make me.

"I'd prefer to have three or four cracking years of winning stuff than having ten years of being average. And Jonny is exactly the same."

Broken glass, sunken ships and Coco-Pops. If it's an unusual recipe for success, it's one that appears to be working.