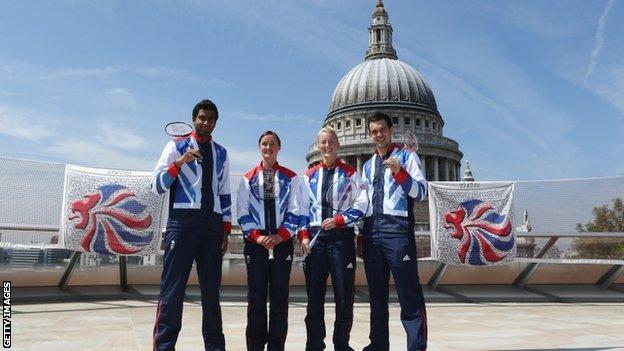 Chris Adcock and Imogen Bankier will represent Great Britain in the badminton mixed doubles at London 2012.

Their selection means there is no Olympics place for 2004 silver winners Nathan Robertson and Jenny Wallwork.

England's Rajiv Ouseph will represent Team GB in the men's singles and Scotland's Susan Egelstaff is picked in the women's singles.

Selection for Team GB was determined solely by players' positions in the world rankings.

England's Adcock and Scotland's Bankier have already tasted success in the Olympic venue, having won their 2011 World Championships silver at Wembley Arena.

Adcock said: "After a tremendously hard year of qualification, when I received my selection letter to say that I would become an Olympian at the London 2012 Games, I was over the moon.

"I had achieved one of my lifelong goals and, now that I have been selected to represent Team GB, my focus is to put myself in the best position possible to perform at my optimum level."

Bankier added: "I am absolutely delighted to become a member of the Team GB badminton team and I'm really looking forward to competing in front of a home crowd at Wembley Arena with the potential to hopefully bring home a medal."

The announcement came on the 35th birthday of Robertson, whose achievement eight years ago came in partnership with Gail Emms.

Chris Adcock and Imogen Bankier finished the Olympic qualification period ranked 10th in the world, which was seven places ahead of Nathan Robertson and Jenny Wallwork.

Find out more about Adock & Bankier by clicking here

Ouseph is five-time English National Champion in men's singles and a Commonwealth Games bronze medallist. He learnt to play the game at his local club in Hounslow, close to the Olympic venue in Wembley.

He added: "The Olympics is a once in a lifetime experience and I'm honoured to be representing Team GB in my home city of London.

"Having grown up here, it's even more exciting to be competing in front of a home crowd and knowing you have great support on the door step."

Egelstaff was picked ahead of Jersey's Elizabeth Cann in the women's singles. She is the most experienced member of the squad and won bronze at the 2006 Commonwealth Games.