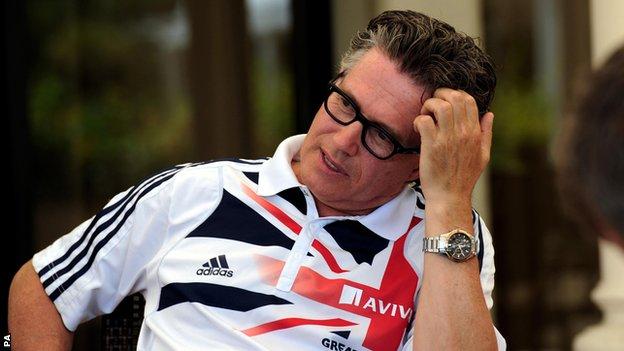 The Dutchman believes the step is necessary to head off potential criticism over "plastic Brits" - or athletes who have switched allegiance to represent Team GB at the Olympics.

"They know the words, or they will," said Van Commenee.

"If they don't, somebody will make an issue of it."

Asked if it should matter whether athletes know the words to the national anthem, he added: "That's a different question.

"I'm not going to rehearse everybody because we have 90 athletes, but people that matter... let's say the relevant ones, the ones on your radar (will rehearse the anthem)."

Van Commenee's choice of United States-born Tiffany Porter as team captain for the World Indoor Championships in March sparked the "Plastic Brits" row after she declined to sing God Save the Queen at a news conference ahead of that meeting.

Porter, who qualifies for Britain through her London-born mother and has held a British passport since birth, said she knew the words but questioned her singing ability.

This is nothing compared to what football managers have to go through, but at least it tells me that athletics is worth talking about

"I do know the first lines," she said at the time. "I know the whole of God Save the Queen."

Van Commenee, who insists he would only know the first two lines of his own national anthem, believes the "Plastic Brits" row is not important in the scheme of things.

"I know in Olympic year all sorts of rubbish comes up," he said.

The 53-year-old claims he had far more important matters to deal with when he was technical director of the Dutch Olympic Committee for the Beijing Olympics in 2008.

"In the lead up to Beijing, there were lots of issues around Taiwan, Tibet, smog, human rights, not having the ability to express yourself in public, child labour," he said. "All these things had to be addressed by me.

"The issues I deal with now are partly not serious, but it comes with the job. This is nothing compared to what football managers have to go through, but at least it tells me that athletics is worth talking about.

"When you are in the spotlight then yes, you get issues to talk about."