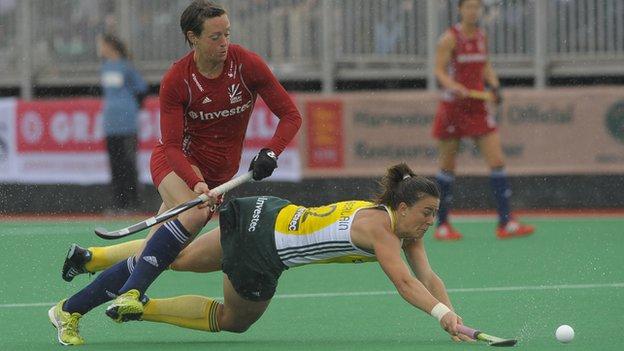 A Great Britain women's side missing key players lost 3-1 to South Africa in the opening match of the London Cup, their final pre-Olympic tournament.

GB were without Alex Danson, Crista Cullen and Sarah Thomas through injury, while captain Kate Walsh was omitted.

"Missing 25% of our Olympic squad is a tough ask," said coach Danny Kerry.

"But the reality was that we still got enough chances in the game to get a result.

"Once we were down, we went after the game really well and generated opportunities. We know which areas to improve on."

Britain's next game in the tournament, taking place in Chiswick in west London, is against Germany on Thursday evening.

In the other match on Tuesday, Olympic champions the Netherlands came from behind to beat Australia 2-1 through two goals from Maartje Paumen.

The GB women's squad, ranked fourth in the world, open their London 2012 campaign against Japan at 19:00 BST on 29 July, with further matches against South Korea, Belgium and China, before taking on the Netherlands in their final group match.

They won the recent Olympic test event, defeating Argentina in the final.