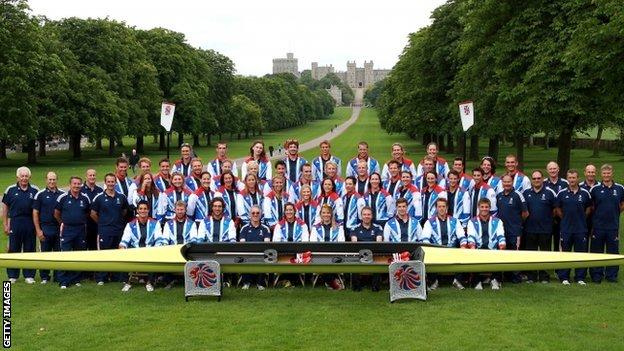 Great Britain have named 48 rowers in the squad for the London Olympics, with four places still to be decided.

Remaining selections in the men's and women's eights will be finalised "in due course", said a Team GB statement.

Britain will compete in 13 of the 14 rowing events at Eton Dorney, with the men's four and men's lightweight double scull defending titles.

The host nation hopes to improve on the record haul of six medals that saw them top the rowing medals table in Beijing.

"We go to the start in London ready to defend our status as the leading rowing nation from Beijing but we are under no illusion as to how tough winning medals, especially gold medals, will be at this Games," said David Tanner, GB Rowing Team performance director.

As expected, Andrew Triggs Hodge, Tom James, Pete Reed and Alex Gregory will attempt to win a fourth consecutive gold medal for Britain in the men's four, following in the footsteps of Sir Steve Redgrave, Sir Matthew Pinsent and James Cracknell among others.

The crew have won both World Cup races this year but were pushed hard by Australia in Lucerne last time out.

"I'm thrilled to be part of the biggest British team ever at our London Olympics," said Reed.

"I have been training for this all my life one way or another. I am a proud lieutenant from the Royal Navy, a proud Olympian and a proud Briton. I'm racing to win."

Anna Watkins and Katherine Grainger are firm favourites in the women's double scull, with Scot Grainger looking to win a first gold after taking silver at the last three Games.

"It's been an incredible honour and privilege to be part of the past three Olympic Games and, as wonderful as they have all been, there is a sense that the upcoming home Games will be on a different scale to anything we've ever seen before," said Grainger.

Greg Searle will get the chance to go for gold in the men's eight 20 years after he won the coxed pairs title in tandem with his brother Jonny and tearful cox Garry Herbert in Barcelona.

Searle, 40, returned to the sport in 2010 having last competed at an Olympics in Sydney 12 years ago.

Only seven rowers have been named in the men's eight, leaving the door open for Constantine Louloudis to be named as stroke despite having missed both of this year's World Cup regattas with a back injury.

A world under-23 champion, it is hoped Louloudis could give Britain the edge after they pushed world champions Germany hard in Belgrade and Lucerne over the last month.

Ten rowers have been named for the women's eight, with selectors likely to use the upcoming Munich World Cup to assess their options once again before making the final decision.

* one further rower will be added at a later date