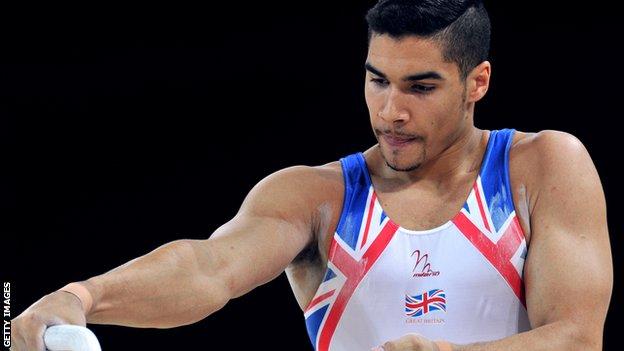 Hungary's Krisztian Berki, a rival for Olympic gold, has

But Smith's coach Paul Hall told BBC Radio Cambridgeshire: "It's a real dilemma over which routine we go for.

"Whether we play safe and make the final and a medal, or whether we go for gold and risk everything."

Berki beat Smith to gold at the European championship's in May - but 23-year-old Smith took second place with Berki third at a World Cup meeting in Slovenia last weekend.

Gymnasts are scored on the difficulty of the routine they perform, as well as the execution and cleanness of the performance.

"I think it's going to be a key moment in London, delivering that routine in the right moment," said Hall.

"It's a big risk because it's so difficult and it's so easy to break form or fall off the apparatus and that's the end of everybody's dream.

"Louis is his own man and he's working very well. He's very focused on the job in hand and we'll go to London in tip top condition.

"Ahead of the Olympics we've got a training camp in France for a couple of weeks and then we transfer to the village.

"Assuming he's selected of course, he'll try and qualify with his routine and then pull out all the stops for the final. His one chance of glory."

Former world silver medallist Smith and his team-mate Daniel Keatings, who pipped Smith to gold on the pommel horse at the 2010 European Championships, will find out if they have earned a place in Great Britain's five-strong team for the Olympics after the national championships at the end of the month.

And while Smith is all but guaranteed a call-up, there will be a more nervous wait for all-rounder Keatings, who returned to action in Slovenia following a spell on the sidelines with an ankle injury.

"Louis is in pole position I would say. Daniel is trying to mark his card and show he deserves a place in the team as well," said Hall.

"He's rehabilitated really well. He's now performing on six apparatus. He goes onto Belgium next week and then the British Championships in Liverpool, where I hope he'll be able to do enough to justify his selection.